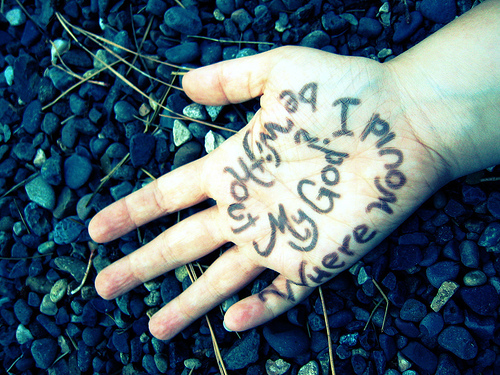 Not long ago, I was sitting at the kitchen table when Rick walked in. He was all duded up in his uniform, getting ready to leave for the day.


Standing there a minute, he pulled out an ink pen and began to write on the palm of his hand.


“Nope. Then I’d just be fishing around in my pocket for it later. This, here, is readily accessible.”


In a flash, I could hear my mother’s voice echoing through the hollow spaces of my mind, “You’ll get ink poisoning!”


Isn’t that funny? Is there really any truth to that? I think it was her way of scaring the bajeebers out me not to write on my body extensions – kind of like telling your kid that if they cross their eyes too much, they’ll stick that way.


“I’ll bet if you had an inspection of most officers’ hands, you would find enough material to write a few crime novels,” I chuckled.


So, it got me to thinking…scary, I know! Am I that quick to make note of something God reveals to me? Sadly, I’d have to say not.


There are times when I’m sitting in those quiet moments with Him, He will reveal something in His word. I’ll highlight or underline it in my Bible, but an hour, two, twenty-four later, I’ve forgotten all about it. If it was that important, shouldn’t I have it readily accessible?


God is big into writing things down, you know. Take His word for example. He used over forty different writers – farmers, kings, prophets, disciples, missionaries, and unknowns, to write down everything dictated to them. Why? So we could have an accurate account of historical events, plus a deeper understanding of the Author and Perfecter of our faith - a road map to His redemptive plan.


In Daniel, Chapter five, a story unfolds with God’s hand of judgment writing on King Belshazzar’s palace wall. Now that, my friend, was a message the king would not soon forget!


What about the Ten Commandments? The scriptures say in Exodus 31:18, “the LORD finished speaking to Moses on Mount Sinai, he gave him the two tablets of the Testimony, the tablets of stone inscribed by the finger of God.”


Hmmm. If God took the time to write them down, they must be important. How is it then that this nation has set them aside, even calling them “blatantly religious — and therefore unconstitutional”? Ludicrous!


I probably won’t be writing things on my hand for fear of ink poisoning, though I might take a minute to write it somewhere a little more visible. Who knows…God may say something important!