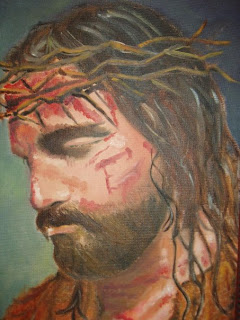 Yesterday, Christians all over the world commemorated Good Friday - the longest day in history.  Not that it literally was the longest day, but in light of the meaning, Jesus' illegal trial and death on the cross, was both physically and emotionally grueling.

Imagine with me as we travel back some 2,000+ years to that moment.  Jesus had been arrested after being betrayed by a close friend, one who had walked with him, been taught by him, ate meals with him, laughed with him, cried with him.

They came in the night for his arrest, armed by a legion of soldiers - some 600 armed men, according to tradition.

He was not a criminal...had committed no crimes other than to heal the sick, drive out demons, preach the good news and claim to be the God man - God in the flesh.  Yet, the Jewish religious leaders were jealous and afraid that somehow this carpenter's son would rise to power and usurp their authority.  He had to be destroyed.

After taking him to the house of the high priest, Caiaphas, he was mocked, falsely accused, spat upon and struck, yet...spoke not a word in his defense.

When morning came, he was delivered over to Pilate, the Roman governor of Judea.  The religious leaders themselves did not enter Pilate's headquarters, so as not to defile themselves before Passover, though at their hands and blood thirsty requests, were demanding death upon the innocent one.

"What accusation do you bring upon this man?" Pilate asked.  "If this man were not doing evil, we would not have delivered him over to you," they retorted.

Pilate questioned Jesus, but found no fault in him, and was greatly amazed by Jesus' silence to the governor's questioning.

Addressing the chanting Jews, Pilate bellowed, "What shall I do with Jesus who is called Christ?"

After washing his hands in front of the crowd, Pilate delivered Jesus into the hands of the guards for public scourging, a most brutal and inhumane punishment.  And yet, Jesus did not condemn his accusers or curse his executioners.  Though bloody and bruised, his heart only held an overwhelming love for those who knew not who he was.

The day wore on.  They stripped him of his clothes, put a scarlet robe on his mangled body, and twisted a crown of thorns for his head.  The razor sharp thorns piercing the skull as they mocked and hit him about his head and body; blood spilling down about him.

Leading him away, they put a wooden beam upon his shoulders, but it was too much weight for him to carry after such a brutal beating.  A man, Simon of Cyrene, was chosen out of the crowd to carry Jesus' cross to the place of his imminent death - Golgotha.

Stumbling, though determined to see it through, he made his way to the executioner's playground.  The place was surrounded by a blood-thirsty crowd destined to see him pay for his "alleged" crimes, though none could be found.  Two other men, one on the left and one on the right, were nailed to their cross and hoisted up into the afternoon sky.

Jesus lay down upon the gnarled wood, his body writhing in anguish as the spikes were driven into bone and flesh.  A few more hours and it would be finished.

Hoisting him up, the jarring and jolts caused by the lifting of the cross, left more tearing and destruction to his already torn body.

His mother, along with his disciple John and several other women, stood helpless at the foot of the cross.  What anguish and hopelessness filled their souls as the blood ran down the thorny way.   Mary could only pray as her baby boy wrestled underneath the weight of his body and the cruel measure of death.

In the sixth hour, a darkness came over the land, so dark that stars began to appear in the sky.  It was a strange sight to behold and a feeling of foreboding was in the air.  In a loud cry, Jesus exclaimed, "Eli, Eli, lema sabachthani?"  My God, my God, why have you forsaken me?

Another cry and death came upon him.  At that moment, the curtain in the temple split in two.  The earth shook and rocks split.  Tombs were opened and many bodies of the dead came back to life and appeared to many.

A centurion standing nearby keeping watch, in amazement and wonder declared, "Truly this was the Son of God!"

The demons danced with glee.  The Christ was dead, yet victory was still to come.

Toward the dawn of the first day of the week, Mary Magdalene and another went to the tomb with spices they had prepared for Jesus' body.  Approaching the tomb, they saw the large stone was rolled away and an angel of the Lord was sitting upon it.

His appearance was brilliant - white as snow.  The women trembled with fright.  "Do not be afraid, for I know that you seek Jesus who was crucified.  He is not here, for he as risen!"

After seeing where he had lain, and the grave clothes folded neatly in the tomb, they ran with joy and excitement to tell the others.  Jesus was truly alive!

Friends, Jesus died and rose from the dead just as He said.  Through this great act of love, He paid our penalty of sin on the cross and paved the way for us to have eternal life with Him in Heaven.

The Bible says, "for all have sinned and fall short of the glory of God, and that while we were still sinners, Christ died for us."

He died to set us free.  All you have to do is believe that Jesus was who He said he was, that He died for your sins on the cross and paid the penalty, and that He rose again and is now seated in the heavenlies on the right side of God.  Repent and ask God to forgive you of your sins against Him, turn from your sinful ways, and follow Him.  It's the best decision you will ever make!