Taking Hope to New England: Our Trip to DC and Maine

Let us not become weary in doing good, for at the proper time we will reap a harvest if we do not give up.
Galatians 6:9

Refreshed.  That is exactly what I'm feeling as I reflect back on last week's events.  As many of you are aware, Rick and I headed out last Monday morning before the sun had a chance to come up, and flew to Washington DC for National Police Week activities.

What an awesome time ministering, sight seeing, and experiencing something that just can't be adequately described in words, other than to say how thankful I am. 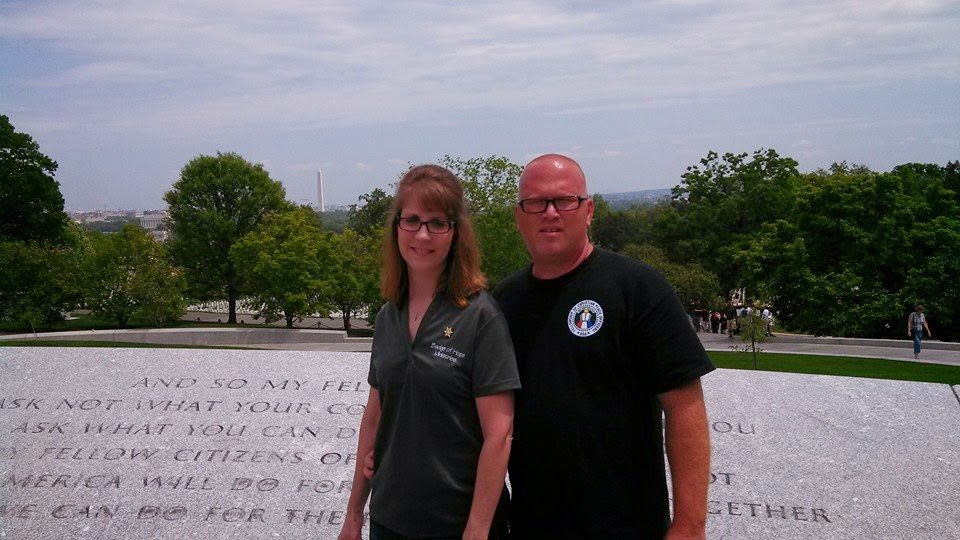 Monday afternoon, we checked into our hotel which was so graciously provided by McLean Bible Chapel in the DC/Maryland area.  There we met up with Code3, a law enforcement ministry out of California, and toured Arlington National Cemetery where we witnessed the changing of the guard at the tomb of the unknown soldier.  Very moving, I can assure you. 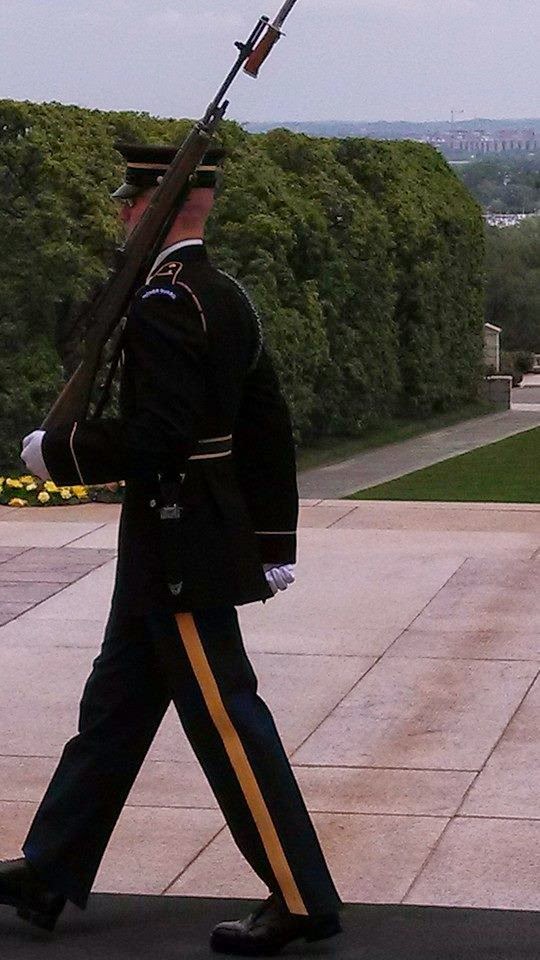 Monday was a sort of "free" day for us since Tuesday would be full of activities at the police memorial wall and tent city, however, we did make our way down to the wall to check out all the new names which had been added, and pay homage to those who had lost their lives in the line of duty.

Tuesday morning, after a much-needed rest and a good breakfast, our group headed to tent city.  This is an area designated for law enforcement and survivors to "chill out" and also check out some of the latest gadgets and memorabilia.

It was extremely hot that day, so shade was a precious commodity.  Despite the heat, Rick and I were able to talk with a few folks about our ministry and leave some information scattered about.  You just never know when someone who is struggling might stumble across it.  God has a way of causing things like that to happen. :) 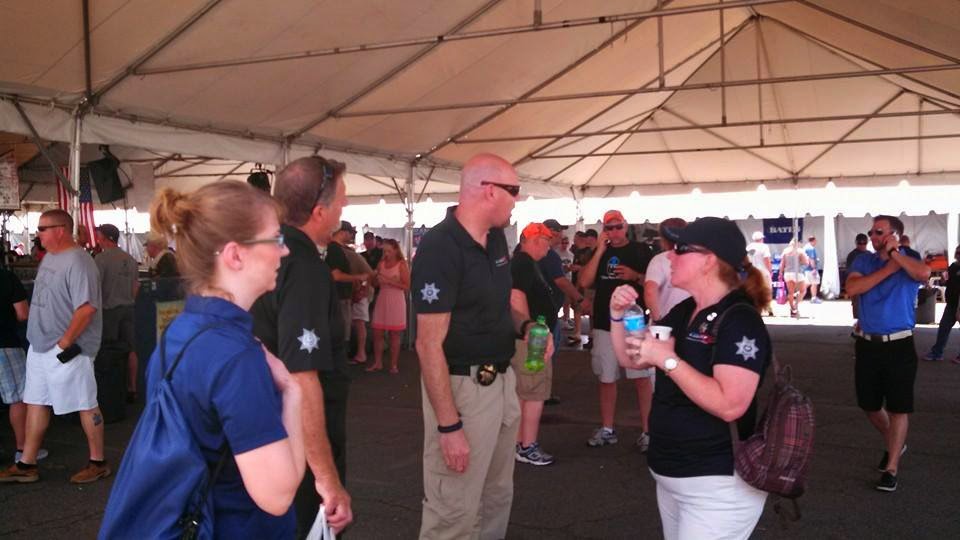 After leaving tent city, we headed back down to the wall.  There is always quite a crowd there.  Many stooped down to rub the name of their friend, co-worker or loved one on a torn off piece of paper.  Children can be seen with their dad's picture pinned to their shirt.  Extremely difficult to witness some of the little ones having to deal with a loss of a parent so young.

Again, we left some information in prominent places, then stepped back to see who might pick it up and read it.  I also walked through the crowd and as the Lord directed, gave scripture cards to those who seemed as if they needed some extra encouragement. 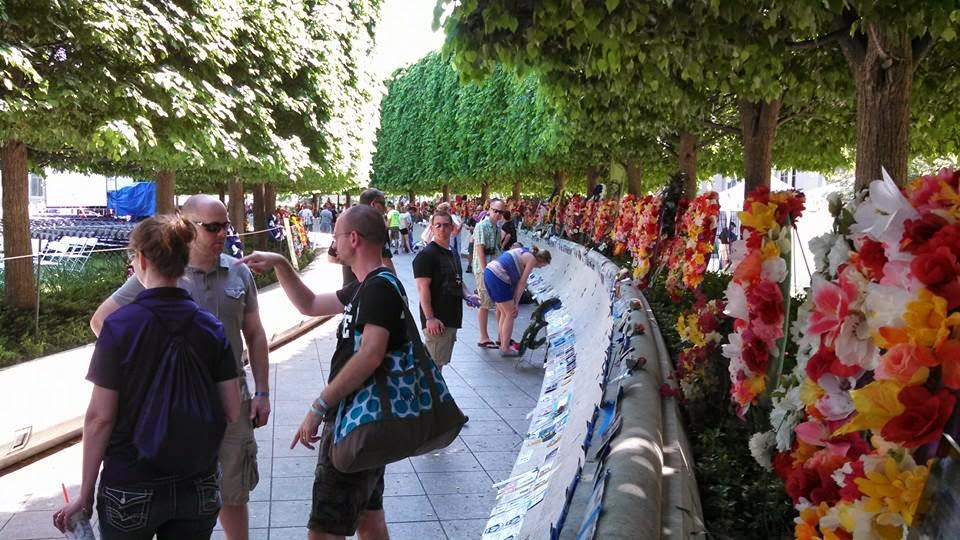 That evening was the blue light ceremony, though due to an approaching storm, had to be postponed for a half an hour or so.  This gave us opportunity to get something to eat and even give a little something extra to a man begging in front of the restaurant.  Our prayer is that he not only got food for his belly, but read the message of hope inside the bag.  Who knows how God can work in and through a situation such as this.

The ceremony was breathtaking as we looked out over the sea of men and women in uniform with their candles lit and raised high to remember the fallen.  The blue lazer beam streamed overhead as we honored the thin blue line and those tightly woven within in it. 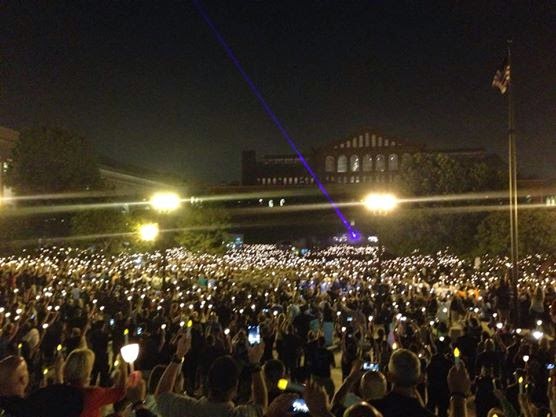 Wednesday was considered another "free" day, though Rick and I always carry around information and are ready to give an answer for the faith we have.   When you've gone through some of the rough spots we have and have discovered that Jesus is the only real answer to those issues, then you naturally want to share that gift with anyone who might want to listen.

We chose to tour the holocaust museum, a pertinent reminder of how sinful man can be when left to his own evil desires and thoughts.

Later, we went back to the wall to watch the bagpipe and drum parade and take part in the ceremony they give to honor the fallen.  Sadly, one of their own collapsed just seconds after marching into the wall area.  Last report we heard was that he was finally breathing on his own and even able to speak.  An answer to many prayers, I assure you. 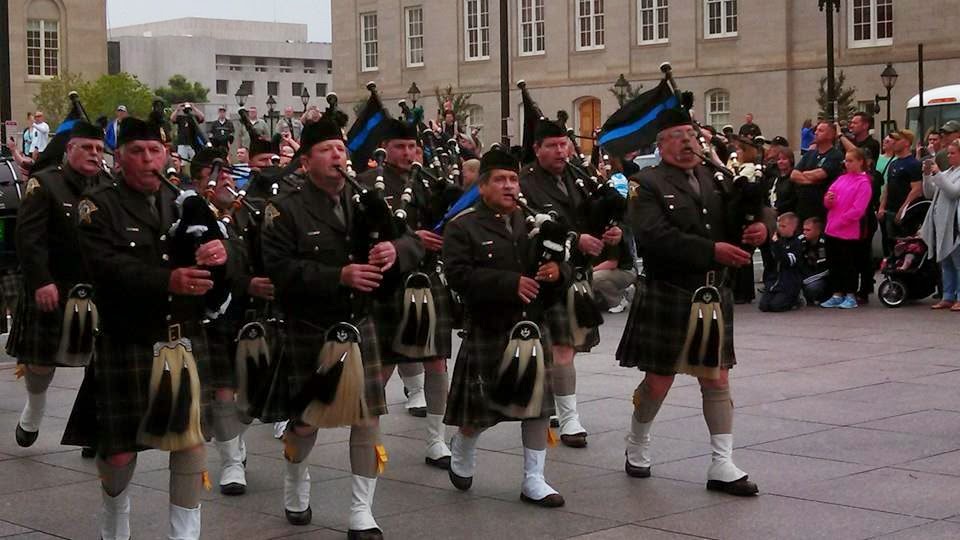 Thursday morning was a little bit of sadness mixed with anticipation for what was to come, we boarded a plane and left DC heading to Bangor, Maine.

Neither of us had ever been to  upper New England, but we were definitely not disappointed.  The Townsend family whom we stayed with, were so hospitable and reminded me as to what some of the early church missionaries must have felt as they traveled around and often received support and encouragement from other believers.  What a wonderful experience! 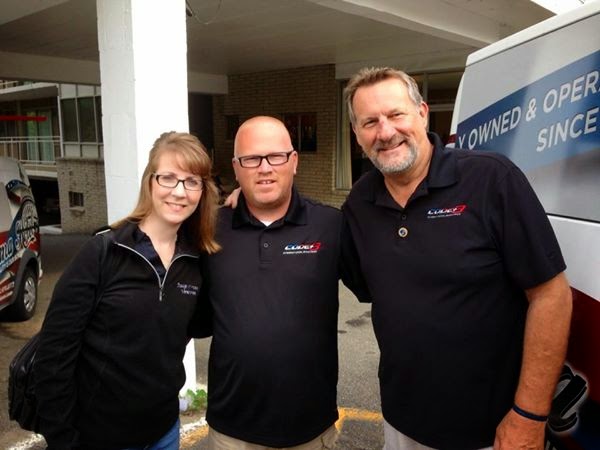 On Friday, Dennis and Elishia took us to the coast where we enjoyed the beauty of the mountains and Atlantic ocean rushing over the rocks along the shore.  Again, I was enamored by God's handiwork and mentally praised Him for His glorious provision in allowing us to experience such greatness. 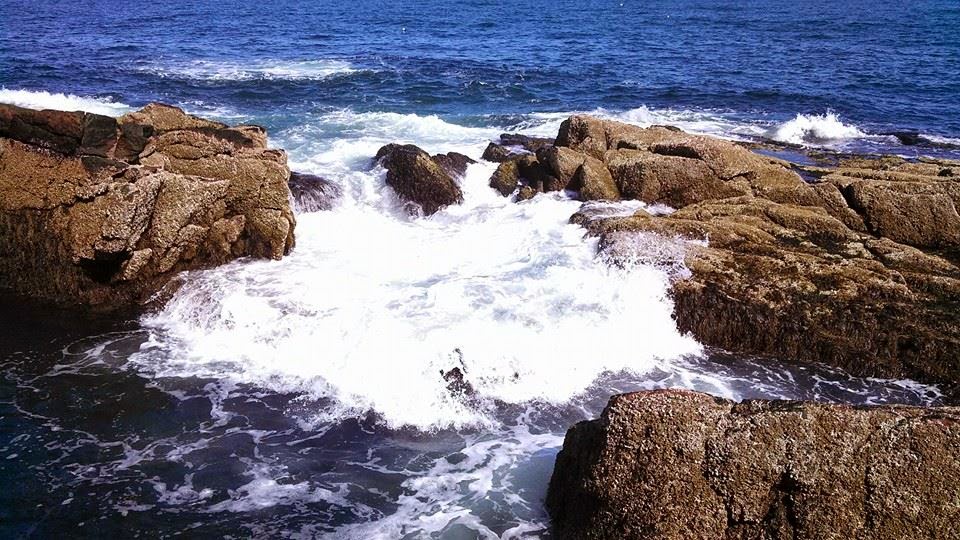 The ride back home was eventful as we stopped by a small store and purchased six or so lobsters awaiting their demise.  Poor things.  As for me...I ate chicken. :) 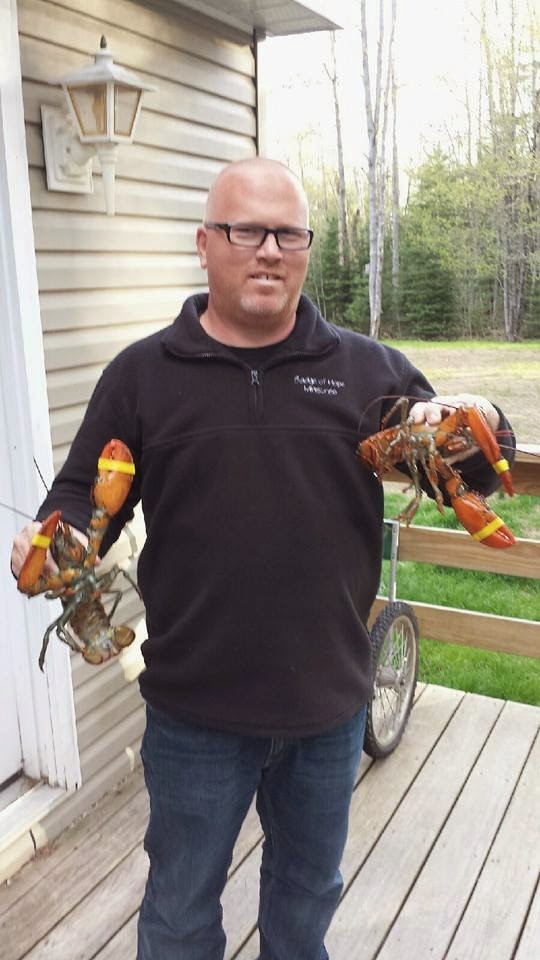 Saturday morning bright and early, we headed to Calvary Chapel and took part in that areas first-ever law enforcement marriage conference.  Though numbers were small, the ones who attended were touched greatly by all that was spoken about.  Of course it is our prayer that marriages will be strengthened and perhaps lives surrendered to the Lord.  What an awesome day!  And...for those of you who know our ongoing Kenya saga....there was a connection there.  This church is involved in a church plant where else, but KENYA.  Of course. ;)  Only God. 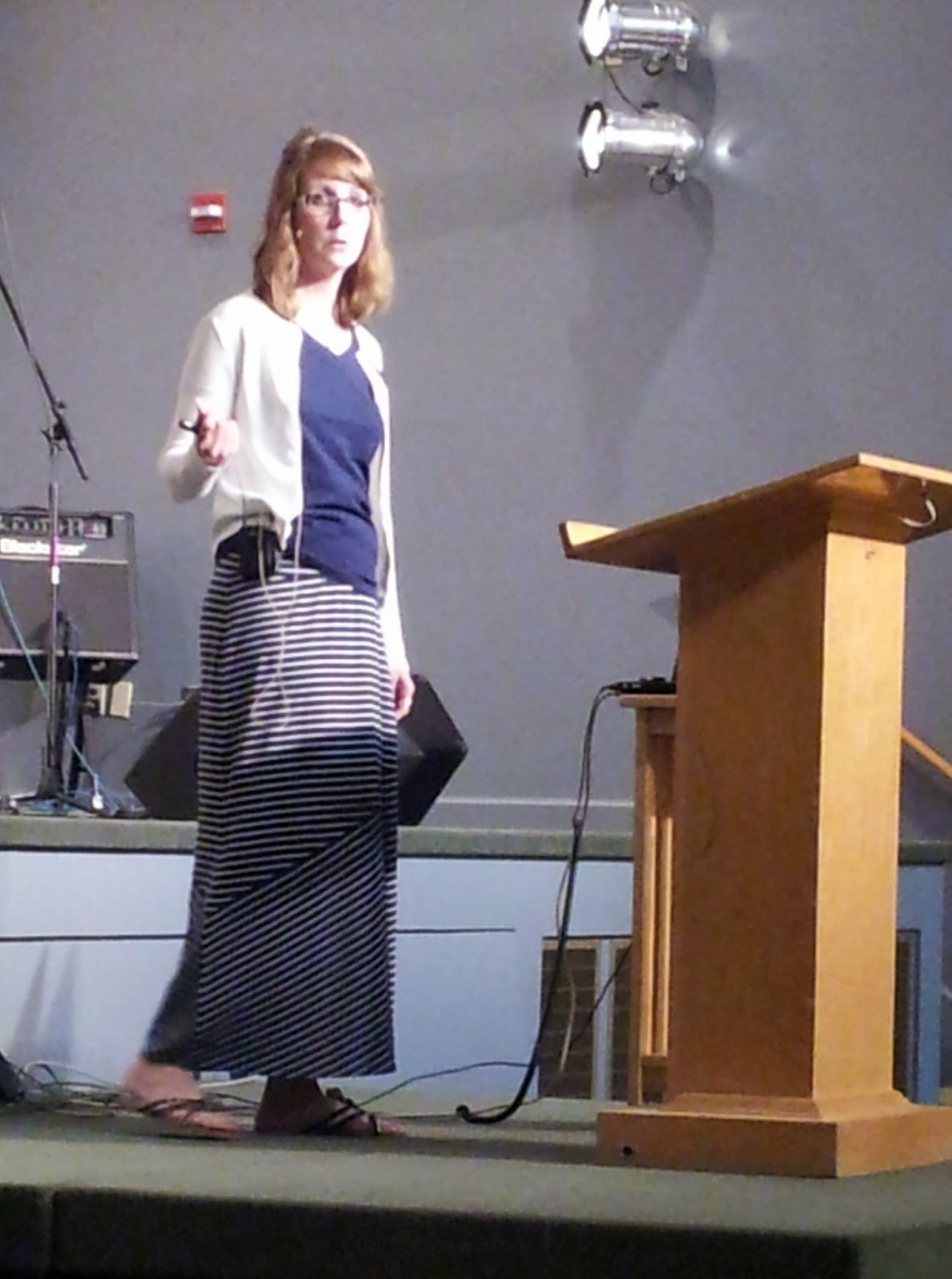 Sunday morning came quickly.  The week gave us opportunity to make so many good memories and to forge new friendships.  Perhaps one day God will see fit to take us back to that area.  Perhaps.

Well...that's our trip in a nutshell.  I have to say that it was one of the more memorable that I've been on.  Though we didn't have some of those "WOW!!" God moments as we have in the past, we did see Him in so many areas.

We are truly blessed to have this ministry and to be able to share some of what we've learned over the years with those who will have us come.

Blessings to you friends.  Hope you have a wonderful, God-filled week.