Helping Our Officers Instead of Throwing Them Under the Bus 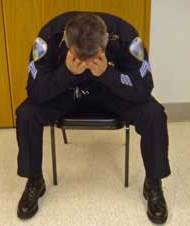 I read a saying not long ago that said something like "Be kind to others for you don't know what battles they may be facing."

Right now, our law enforcement is feeling the weight of accusations, criticisms, and armchair quarterbacking from people who have never been in their position,  nor have taken the time to know the person behind the badge.

As I was planning on addressing this scenario on today's blog, I received the following email from a friend and would like to share it, as I believe he hits the nail on the head.

Blessings.  Be kind out there.

Recently it became public that the police officer in McKinney TX had been on two suicide calls just prior to arriving on the scene of the now widely disputed pool party.  Perhaps that means nothing to the agitators, race baiters, and media, but hatred never has cared about truth. Up until this new information was released, all that was known is that his own Chief said his actions were “inexcusable.” Really? This new information sheds a different light, and calls into question this Chief’s quickness to throw his officer under the bus. The truth? This officer should have never been on the call because his Chief should have called him to the station for debriefing after two traumatic events.

As a former police officer who has been on those calls, and today operating a non-profit for public safety that has included suicide calls, I will say without question or hesitation this officer was emotional charged as a result of experiencing two traumatic calls immediately preceding his arrival at the pool party.

1.    Direct exposure.
2.    Witnessing, in person.
3.    Indirectly, by learning that a close relative or close friend was exposed to trauma. If the event involved actual or threatened death, it must have been violent or accidental.
4.    Repeated or extreme indirect exposure to aversive details of the event(s), usually in the course of professional duties (e.g., first responders, collecting body parts; professionals repeatedly exposed to details of child abuse). This does not include indirect non-professional exposure through electronic media, television, movies, or pictures.


Without question, this definition from the DSM-5 in which American Psychiatric Association
revised the PTSD diagnostic criteria in the fifth edition of its Diagnostic and Statistical Manual of Mental Disorders (DSM-5) (1) provides an answer. From the traumatic experience, the DSM-5 cites specific symptoms, concurred by the ICD-10. Any officer working two suicides in the same day back to back is clearly traumatized – something any police administration should recognize and act accordingly.
In one interview, it was suggested that the officer should have removed himself from duty if he felt emotionally overwrought.

Considering his department’s failure to debrief him after two suicides, I doubt such a request would have been accepted.

All departments must have a debriefing policy and protocol for officers involved in traumatic incidents. Failure to do so risks what happened in Texas. Overreaction due to traumatic stress from 2 suicides just prior.
Most departments do have policies and procedures for such incidents. I have done debriefings at their request. Those departments are run by administrators who care about the welfare of their officers – and the same goes for all professions of first responders.

What should have happened is that the patrol command on duty call the officer to the station after the suicides. Any reasonable supervisor would recognize the need. Moreover, the Chief, rather than throwing the officer under the bus by saying his actions were inexcusable, would have an appropriate policy in place, and would have accepted responsibility for not having one in this instance.  Shame on the Chief.

Frankly, it is my position that 100% of those in public safety experience some symptoms of PTSD, including dispatchers who take the call of a victim being attacked to the first responders on the scene taking care if the incident. From that first traumatic call, from that very first dead body, the public safety professional cannot un-ring the bell. They will forever more have seen a dead victim typically in a traumatic incident.

I operate a non-profit, Serve & Protect, for public safety professionals including criminal justice and emergency services. These heroes deserve proper assistance with behavioral health. As a former law enforcement professional, I understand the traumatic experiences, and have experienced them. Hearing an 18 year old girl struck by a drunk driver breathe her last breath qualifies.

Serve & Protect and our partner Safe Call Now provide a nationwide 24/7 unique resource providing our signature confidential, comprehensive, collaborative, compassionate care for public safety and their families. We find the right solution for real problems our heroes face. We provide personalized solutions for each caller, dedicated to finding them the right level of care with the care provider best suited for their needs. We charge nothing for our services and take absolutely no referral fee from our care partners. Our website www.serveprotect.org provides considerable information including educational videos about suicide and PTSD.