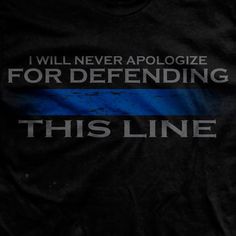 I was recently informed of a documentary that is to be shown in our area - the St. Louis area...the heart of the Ferguson riots area.

This documentary is about police in this country, and from what I can tell from the brief description and small video clip, will not promote them in a favorable light.

So, I have a choice.  I can either sit back and like so many, let this skewed version of things be shown without voicing my personal understanding of law enforcement, or I can speak up.  I have chosen the latter.

Though it may fall on deaf ears, and presumably will, this is the letter I sent to the ones "in charge".  As you can see, I neither belittled or cursed, abused or otherwise acted in any way but cordial.  Yet, I feel that I got my point across and if nothing else, can share that letter here with you in hopes that in some way, it will send a message to my blue family, that someone does care...someone is taking a stand...someone is hearing them.

With everything that has transpired in Ferguson and the surrounding communities, not to mention the ever-widening divide between communities and our law enforcement, I feel as if this film could re-open, re-ignite and fast forward any animosity and hatred which continually simmers beneath the surface.

I have met hundreds if not thousands of officers over the years, and can tell you that the vast majority of them went into the job because they care about people and want to help.  These are moms and dads, sons and daughters, sisters and brothers - black, white, Hispanic, etc., who feel called to a higher calling to serve.

But I also know that there are officers...those few who have a chip on their shoulder, and who for whatever reason have slipped into departments.  Right now, these are not the norm.  However, if we continually lump together, continually question, and call out all law enforcement, it will do nothing more than create chaos, hatred, and breed corruption.

Moral is at its lowest levels within our departments.  Many officers are struggling with PTSD (Post Traumatic Stress Disorder) and a number of them are committing suicide because they cannot deal with the pressures of what they see and deal with.  Alcoholism is on the rise.  Drug abuse is prevalent.  Where are the films that display support for those who put their lives on the line to keep our communities safe?  Where are the news stories that say "Thank you!" instead of "how could you?"

Did you know that we have lost 29 officers this year - 14 of those to gunfire?  A number of those were targeted simply because they were a cop.  This is what officers are up against.  This is what they are thinking in those split decision moments.

Every day they put on that uniform, I wonder if someone who has had a bad experience in the past or who simply hates cops, will put a hole in one of my officers.

It is my fear, that movies like this will do nothing to promote positive results or clear up any misconceptions, but will only breed more distance and hatred.

It is my prayer that the ______________ will think carefully, weigh the potential outcome, and choose to abandon this project.

Thank you for your time and consideration.  Please feel free to forward this to the necessary departments.

We must take a stand.  We must be a voice.  We can't stay silent any longer.