Marriage Under Fire - Part I 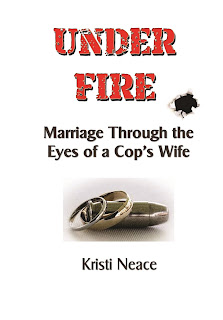 This past Monday, I was privileged to speak at the RISE Christian Police Conference in Haymarket, VA.

Here is Part 1 to my talk.  Check back this weekend for Part 2.

February 2, 1998, Officer Katie Conway was patrolling one of Cincinnati’s toughest neighborhoods.  As she approached an intersection, 41-year-old Daniel Williams – a frequent flier with police with 17 prior arrests and a history of mental illness, stepped out in front of her patrol car carrying a boom box.

Katie instinctively mashed on the break in order to avoid hitting him.  Mr. Williams quickly made his way to the driver’s side window and proceeded to smash Officer Conway in the face with the boom box, then produced a weapon and fired four times into her leg and hip area.

Katie’s body was laying on her holster,  yet she somehow managed to get her gun and shoot Mr. Williams twice in the head…miraculously through the same hole.  However, now that Mr. Williams was slumped over the wheel, the car left the roadway and careened into a wall.

With eight entrance and exit wounds in her body, Katie calmly put in a call to dispatch and advised them of the situation.  Help was on the way.

Later as she  recalled the harrowing incident, she said, “Someone was going to die that night and it wasn’t going to be me”.

So what does this story have to do with marriage?  I believe there are some incredible principals that we can apply to what each of us experience today within our own situations.

1. There is a real enemy who will come against your marriage.

Statistics show that LE divorce rate is anywhere from 65-80%

Husbands are walking away in alarming numbers

“I just don’t love you anymore” is becoming the all-too-familiar mantra.

The American Academy of Matrimonial Lawyers state that 56% of divorce cases involved one partner having an obsessive interest in pornographic websites.

LE Marriages are buckling under pressure and we have been duped into believing that it is our spouse who is the problem.  So, we begin to sabotage the very thing God put together.

Within our academies, new recruits are being taught how to stay alive and all the ins and outs of community policing, and rightly so, but we are failing our families by neglecting to teach them how to stay together.

We are putting more emphasis on holding the blue line than honoring the marriage covenant.

So who is our enemy?

Is it the cute store clerk at the local convenience store where you stop to get your coffee?

Is it the good looking guy in the next cubicle?

Is it the de-moralizing fantasy on the television or computer screen?

Could it be the abuse and over consumption of alcohol, or the secretive addiction to a narcotic in order to try and deaden the mental pain that some are dealing with?

No.  ... behind all those different outward masks there is something much darker, and he has a name.

He is the evil one…

The father of lies…

The man of lawlessness.

It is he who is behind all the junk we are seeing within our marriage struggles today.

The Bible tells us:

“Be self-controlled and alert.  Your enemy the devil prowls around like a roaring lion looking for someone to devour.”  1 Peter 5:8

In Officer Conway’s case, her enemy was a mentally deranged man with a gun and a boom box.  But even behind that man’s actions, there was something much more sinister;  something darker and unseen.  The very same goes for our marriages.

It is he who plants these seeds of discord.

It is he who tells you and me that we would be better off with someone else.

It is he who stirs up the throes of frustration, resentment and hopelessness.

We must recognize what’s happening.  We have an enemy who would like nothing more than for our marriage to suffer and die while he takes the wheel and drives us into oblivion.

2.  We may come under fire, but we will refuse to go down

Officer Katie Conway was seriously wounded that night, but she refused to let it take her.

You and I are in a battle for our marriages.  We are going to take on serious wounds.

Some may be physical as we deal with the stress and the frustrations of a broken union.  These things can take a toll on our health.

But most will revolve around what I like to call a M.E.S. …Mental, Emotional and Spiritual.  These are some of the hardest to heal from.

We will have dark times in our lives, but we have a choice.  We can either lay down and die, or we can fight and see it to another day.

If you have your Bible, turn with me to the book of Ephesians.

I believe it is fitting that the Apostle Paul was addressing the Ephesians.  He knew exactly what areas the enemy would target...things such as unity within the body of believers, lusts of the flesh, anger, unwholesome talk, bitterness and rage, sexual immorality, drunkenness, submission of husbands and wives to one another, obedience of children and finally ending it with Chapter 6 - spiritual armor of God.  In this chapter, we are given an arsenal of weaponry in order to defeat the enemy, but sadly, we often ignore, neglect or simply refuse to pick it up.

This book could have been directly written to law enforcement, as there are key verses which point us to some of the very same situations we are finding ourselves in today.  Paul also gives us timely solutions to help us fight on just as Katie did.

Paul writes, “As a prisoner for the Lord, then, I urge you to live a life worthy of the calling you have received.  Be completely humble and gentle; be patient, bearing with one another in love.  Make every effort to keep the unity of the Spirit through the bond of peace.”

A.  Live up to your calling

We know that law enforcement is a called profession.  God ordained it in Romans, chapter 13, but you and I if we are believers in Christ are called to an even higher calling than an earthly job.

We are called into salvation, an eternal covenant with a holy God; a royal position that was paid by Jesus’ blood on the cross.

Because of that calling, and for those of us who have answered that call, Paul says we are to live in such a way that we are different from the crowd around us.

If you think about some of the guys and gals you work with or even those you deal with on the streets, who do their lives reflect?  God or themselves?

Who do their marriages reflect?  God or themselves?

Paul says that we are to be humble and gentle.  Now, that’s not always the first quality we see in an officer.  You people must be at times aggressive, in charge, and a voice of authority.  Humbleness and gentleness often get pushed to the background.  But so it goes with all of us.  Husbands, wives, we often get on the defensive.  Pride has a way of worming itself in there and we take on an “I” problem.

In our marriages especially, it’s rarely our fault when things go bad.  It’s hardly ever that we humble ourselves and say, “You know what...I was in the wrong, or I failed to do this or that.  I’m sorry.”  Instead we say, “Well...I tried everything to make it work.  I tried to make him or her happy.”

Yet the Bible reminds us that our character should be one of patience...bearing with one another in love, or as I’ve heard it said before, “bearing with the bears”.  We are to be peace makers because of the calling we have on our lives.

Yes, friend, marriage is  tough.  We do come under fire every day, yet we can be victorious with the tools that God has given.

Check back this weekend for Part 2 of this encouraging talk and how we can defeat the enemy.