Facing the Giants in Your Marriage

What would you say is the biggest obstacle or “giant” in your marriage, and do you have a battle plan to fix it?

Now hang on to that thought.  Hopefully you will be able to answer it by the end of this blog. 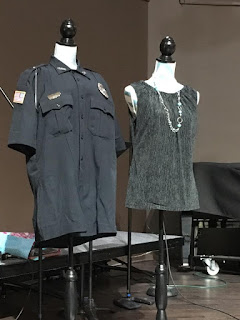 What I want to do here is tell you their story.  You know, we all have a story.  Some of us have a real eventful past.  Others of us…well…we lived pretty ordinary lives.

Your story will probably look a lot different than mine or even your spouse's.  In this story, I’m going to give you some extremes, but hopefully you will be able to take "their" story and replace it with yours.

As I give you each step of their story, you will find a "wound".  These wounds can cause deep scarring and baggage that is carried over into the marriage.

Let's take a moment to peer into this couple's story and see what wounds they have experienced:

Jack is a cop.  This profession was something he always wanted to do, however it requires him to work long hours with not much time off for family, friends, or hobbies.

When Jack was little, his dad was arrested for abusing his mom, and a kind police officer played with him until his grandparents could arrive.  He had always said that someday, he was going to help people just like that officer.

Throughout his career, though Jack has always been a hard worker, he has often been overlooked when it comes time for promotions.

Five years ago, Jack was involved in a pursuit which ended in a bad crash.  The driver he had been chasing was ejected and paralyzed from his injuries.  Though Jack had followed protocol, his mind kept replaying the events of the night wondering if things could have been handled differently.  Jack was later sued by the man in the crash.

Two years ago, Jack married his college sweetheart.  Things were great at first, but then his wife, Jill had a miscarriage.

Jack began drinking to help with the sadness he was feeling.

Six months later, Jack’s co-worker and best friend was hit and killed while on a traffic stop.  Jack sank farther down and the drinking became heavier.  Jill grew to resent Jack as he always seemed preoccupied and did not show her the love and attention she desperately needed.

Eventually their marriage was in shambles, Jack was messing up on the job, and there seemed to be no answers.  Life seemed hopeless.

Jill grew up in a stable, loving home.  Her parents were good to her, but she always felt empty inside.

Though Jill was very talented and intelligent, she always seemed to run around with the wrong crowd who often got her into trouble.  Because of some insecurities she had, she dated some not-so-desirable guys and finally ended up pregnant in her senior year of high school.

Jill worried about what her parents would think, so she aborted her child after just a few months into the pregnancy.

Trying to bury her deep regrets, she poured herself into her school work, graduated high school and moved away to college and met Jack.

Jack was planning on going into law enforcement and Jill’s parents were happy that she had finally found a decent guy.

Jack and Jill continued dating after college, but instead of committing to one another through marriage, they chose to live together for the first few years of his law enforcement career until he could get his feet on the ground.

After a few years, Jack and Jill married and began trying for a baby, but it seemed impossible.  Finally, after many months, Jill became pregnant then lost the baby in the first trimester.

Those old feelings of regret, self-doubt and insecurities began creeping up into her mind.  She blamed herself for this baby’s death, and felt the weight of the other one as well.

Jack began drinking heavily and was disengaged to her and the marriage.  Jill felt all alone and began resenting Jack’s distance.

Jill began self-medicating to try and deaden the pain.  Jack would yell and tell her that her “problem” would be the ruin of his career.

After many months of lifeless marriage, she decided the relationship was over and walked out.  Life seemed hopeless.

The above is a fictitious story, yet the wounds this couple have aren’t really any different from the wounds you and I walk around with every single day.

Each of us come into our marriage with scars from things in the past - some profoundly deep. Many of us also seem to wear an invisible magnetic strip that attracts new trauma.

At times, we feel like itty bitty grasshoppers up against these gigantic situations, and if we are not careful, those giants in our marriage will begin to drive a wedge between us…pull us apart.

I asked you earlier the question:
What would you say is the biggest obstacle or “giant” in your marriage and do you have a battle plan to fix it?

I don’t know how you would answer that, but you and I cannot overcome these obstacles without a plan.

Think about it this way…what would happen if you and your fellow officers never trained for an active “killer” situation?  In a moment of real terror, you would not be able to effectively take out the threat.  Right?

And even then, as we’ve seen in Orlando and Dallas and Baton Rouge, man’s plans and training can fail to an extent; they don’t cover the unexpected.  It’s only when we have our hearts and minds focused on the right thing, that our plans succeed.

Isaiah 32:8 says, “But the noble man makes noble plans, and by noble deeds he stands.”

I want us to take a bit of a detour now from Jack and Jill.  For a moment I want us to focus on a young man named David who was up against a huge giant in his life.

If any of you are familiar with the old story of David and Goliath, I think we can liken that story to our marriages today.

If you’re not familiar, David was a young man serving as a lowly shepherd keeping watch over a flock of his father’s sheep.

One particular day, the Bible tells us that he had gone up to where two armies faced each other (Israelites vs. Philistines).

This had all the makings of an epic fail on the part of the Israelites.  They were up against a human giant named, Goliath.  (9 ft., 9 in)  I guess you could say this dude was the Philistines weapon of mass destruction.

For forty days, this giant taunted the Israelite army.  No soldier was brave enough to stand up to him.

They had already been defeated in their own minds….ready to throw in the towel and face their lot in life.

Enter David.  He had a plan.  He knew that he could not defeat the giant in his own strength.  He would have to depend on something much greater than himself.
As he stood before this giant who was staring him down, hurling insults at him, mocking and laughing at his weakness, David said these words…

“You come against me with sword and spear and javelin, but I come against you in the name of the LORD Almighty, the God of the armies of Israel, whom you have defied.” (vs. 45 of 1 Sam. 17)

“All those gathered here will know that it is not by sword or spear that the LORD saves; for the battle is the LORD’s, and he will give all of you into our hands.” (vs. 47)

With that, he picked up a smooth stone, AND with the power of the Lord behind him, David killed the giant with one pebble to the head.

So what does this story tell us about Jack and Jill and all the other marriages that are facing giants today?

If you or I go into our marriage thinking, “I’ve got this,” we are sorely mistaken and underestimating the power of the one who seeks to come against us.  We will be defeated.

Going back to Jack and Jill…

These are wounded people.  They each have things in their lives that if left unchecked will not only destroy them personally, but will destroy their marriage.

The fights and disagreements they have may take on outward symptoms –
She is angry and resentful of him because he has pulled away. He is hurt and disillusioned with her because perhaps she seems needy and demanding.

These are not the problems.  These are just surface symptoms of a deeper rooted situation.

You see, the very heart of the matter is sin.  These two were and are living with their focus totally on themselves.  They hadn’t learned to put Christ first and allow Him to release them from all the past hurts…to clean them up from the inside outward.

He was hurt as a child.  The people who he thought were supposed to be there for him and love him, couldn’t take care of their own lives.

He felt unappreciated and unnoticed at work.

She felt as if she had to perform in order to get attention.

The enemy had seemingly won.  He won!  The wounds that had been inflicted early on…well, they did their trick.  They destroyed Jack and Jill’s happy lives.

This couple had nothing to bind them together…no firm foundation for their marriage to stand on and the enemy had blinded them to God’s grace and love.

The giants in their lives had overtaken them and they were without a plan to defeat their enemy.


“Just so happens” family and friends had been praying for them.  They decided to go to an LE marriage conference.  There they heard that it wasn’t hopeless, that God is still a God who fixes what is broken; that HE is the answer to their deepest needs.  Little by little He began putting the pieces back together.

Both Jack and Jill turned their broken past over to the Lord and He in turn, shrouded them with His love, binding their hearts and lives to Him first, then to each other second.

Don't give up, loved ones.  Turn your lives over to the Lord, and that baggage will no longer be a giant in your marriage.  He will!