Not Luck 'O the Irish at All 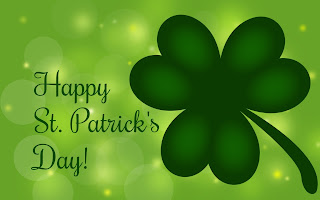 Today is St. Patrick's Day. Many people have different traditions for this day - wearing green, eating cornbeef and cabbage, drinking ale, pinching those who aren't in the spirit, but what is the real meaning behind the day?

According to Wilkipedia, "Patrick was a 5th-century Romano-British Christian missionary and bishop in Ireland. His father was a deacon and his grandfather was a priest in the Christian church. According to the Declaration, at the age of sixteen, he was kidnapped by Irish raiders and taken as a slave to Gaelic Ireland. It says that he spent six years there working as a shepherd and that during this time he 'found God."

Sometimes it takes a tragedy or trial to help usher us into the calling God has for us. It's not by luck or happenstance, but by God's divine providence. This day is not about a color, drink, or a certain type of food. This day represents one man's struggles which became the salvation message to thousands.

How's that for a holiday?