The Michael Brown Settlement - A Blackened Eye for Truth 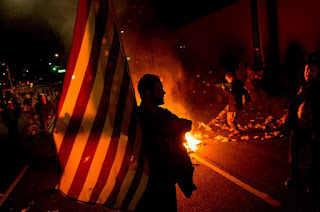 Yesterday I read where Michael Brown's parents settled the lawsuit with the City of Ferguson, former Chief Tom Jackson, and former Officer Darren Wilson, for a cool $1.5 million.  What a sham and shame.

This case has set precedent from the get go - criminals can be; according to many, should be; and as we are seeing, will often be, rewarded for their crime.  Though I might add...here this side of eternity.

So what are some things we've learned from this Ferguson fiasco?

1.  Criminals can become legends and their parents millionaires - Here was a teenager who was brought up with a chip on his shoulder and a gear to grind.  He walked around with self entitlement all over his person, and that is what legends are made of.  Right?

Like out of an old western movie, this young man came onto the scene with mischief in mind, and in the end, his threatening approach caused a deadly reaction from the now ostracized lawman.

Overnight, the story spun out of control.  It's a big deal when even your Attorney General and the POTUS get involved, and no, they didn't wait until all the facts were hammered out.  They just slung the mud with the rest of them, and at their nodding, allowed protesters to burn and loot and scar a community.


God tells us that "A wise son brings joy to his father, but a foolish son grief to his mother."  This young man made foolish choices and assuredly brought grief to his family, but also paved the way for opportunity to cash in on the situation.  Yet God also reminds us that "Ill-gotten treasures are of no value, but righteousness delivers from death."

Money can only bring satisfaction for so long.  Ultimately, it will lead to a deeper and darker pit.  Only God can bring about the healing closure this family needs.

2. Cops are now hounded, hesitant and hated (even more) - What about Darren Wilson?  Did anyone stop for a moment and think about him...his wife...child?  What about his parents?  He did take a young man's life, not a pleasant experience or one a person would care to repeat.  He lost his career, his livelihood, and his safety, but there will be no big payout for him.

This lawman had a bounty on his head and a name that many came to hate.  He went down in law books, magazine articles and thousands upon thousands of commentary as the "white cop who shot a black college student," and because of that one unfathomable moment in time, cops all over the country have felt the backlash of a wave of folks who now in some warped way, see it as a favor to ignore, harass and even kill those that God put into authority.

Not only that, however.  Now, we have a new generation of officers refusing and hesitating to take lethal force because of "what might become" of a situation.  Sadly, some have died as a result of this Ferguson effect trumping their standardized training, and that just adds insult to injury.

May we never get so far left that we forget, "He is God's servant to do you good.  But if you do wrong, be afraid, for he does not bear the sword for nothing.  He is God's servant, an agent of wrath to bring punishment on the wrongdoer." Romans 13:4

3.  A great divide rekindled and re-worked -  The saddest of all things that have come from this tragic tale, is the great divide that has come between black and white, rich and middle class, right and left, and friend against friend.

We have come to a point in our history, when nothing can hardly be said without someone becoming angered and heated - many to the point of destroying the other for difference of opinion.

We have witnessed entire cities becoming enraged and engulfed in violence all because they could not respect the other's differences.  We have witnessed Hollywood icon after Hollywood icon belittle, disrespect and blatantly threaten our nation's President.  And now, we are a nation divided, producing more violent acts, more greed, and unfortunately, more Ferguson effects, unless we do something to change the climate of our culture.

It reminds me of what God said through Paul in 2 Timothy 3:1-4, "There will be terrible times in the last days.  People will be lovers of themselves, lovers of money, boastful, proud, abusive, disobedient to their parents, ungrateful, unholy, without love, unforgiving, slanderous, without self-control, brutal,  not lovers of the good, treacherous, rash, conceited, lovers of pleasure rather than lovers of God..."


So what comes out of all of this?  What do we do?  How do we take this blackened eye for truth and turn it into a learning process?

The key to the greed and the hatred and the unruliness and the ungodliness of it all is one word...

He's the answer to darkened humanity.  He alone can make truth shine.  Let's take every opportunity to do good where we can, show love when it would be easier to hate, overlook offense instead of seeking to destroy, and promote healing where brokenness resides.

This is a challenge for all of us.  This is a God-sized task.