A Convicted Felon Selected to Weigh In on New Police Chief - Is that an Oxymoron? 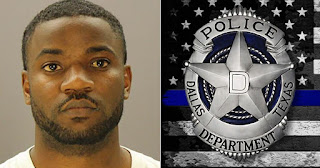 Okay, so get this.  A convicted felon, Dominique Alexander - a man with a rap sheet a mile long, has been selected to serve on a panel that will pick the new Dallas Police Chief.

Sometimes I just shake my head in disbelief at the ludicrousness of things like this happening every day around our world.  Yet, this is the time we now live in.

In all seriousness, and in this particular situation, the lives of law enforcement officers and citizens are at stake.  When a city the size of Dallas, or anywhere for that matter, allow criminals to have a voice in the hiring or overseeing of law enforcement, it is the opening of a Pandora's box for a greater breakdown in the authority, integrity and safety of our law enforcement, and creates a shadow institution that misrepresents what the position is commanded to uphold.

With an ever-widening divide between blacks and whites, police and criminals, the careless thought of placing a man who has clear issues with authority, in a place of authority, is ludicrous.

What kind of leader will he lean towards?  One that upholds the law with the utmost integrity?  Will he choose one who does not see color, background or agenda?  Will he be able to be unbiased and able to keep the best interests of both the officers and citizens of the City of Dallas, at heart?

No, most likely not.  Though I do not know Dominique personally, he has not proven himself trustworthy.  He has not offered any sign of trying to bridge the gap or heal the divide. He has not shown any outward display of a change in heart toward police or even of himself, and the fear is that he will sway others into a less safe, less conscientious, less fare, less upstanding candidate.

I recently read an article that said the officers who were killed last year in the Dallas shootings, were told to not wear riot gear, bulletproof vests, etc., so as not to look too militarized.  What a sham!  Lives were lost because of poor leadership and their decisions, and the fear that this will only continue...even get worse, haunts the law enforcement community.

Where are our men and women of wisdom and honest leadership?  How has it come to this that we have folks completely out of touch with reality, sporting their own agendas and carelessly making decisions that cost more divisiveness, and antagonize and already festering boil?

I tell you where it starts.  It starts in the heart.  We live in a world full of people.  Many of those are God-fearing individuals who live in such a way that displays a miraculously changed heart.  There are also seemingly many more who simply walk through life in their own brokenness and create misery wherever they go.

Each one of us would be that very same way if it weren't for the changing love of Christ.

So, what this means is that we have broken people in places of authority, making flawed decisions affecting everyone around them, leading to a deeper break down of society.

What we need now is a a stand up of faith - the kind that says, "No matter the darkness, the struggle, the pain, or the frustration I may encounter, I will keep my eyes on the Lord and live for Him no matter what".

We need city councilmen/women, police chiefs, mayors, government officials, etc., to set aside their own opinions and desires, and instead pick up the torch of truth, integrity and uprightness.  We need God-fearing leaders.  We need citizens who are willing to pray for those people in authority, and speak up when the need arises.  We need to get back to honor in this nation, instead of rewards for criminal activity and those who participate in them.  There needs to be consequences for wrong behavior and diminish the glamour of ungodliness.  We need to once again encourage and stand behind those who put their life between goodness and evil, not make a mockery of it by allowing criminals to help in the hiring process of their own overseers.

I pray that this man in question will have a true change of heart, but also the City of Dallas will come to their senses and rethink this decision.

Officers, I stand behind you.


*Article about the Dominque Alexander - https://bluelivesmatter.blue/dominique-alexander-dallas-police-chief/