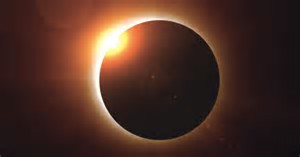 There's a big buzz going on right now due to the upcoming solar eclipse.  From what I've read, we haven't had one in 99 years, and absolutely not one solely in the U.S. since before the nation was founded.  I guess that's impressive.

Schools are shutting down, businesses letting their employees take time off in order to view this blessed event.  For me, I'm just more concerned as to how I'm going to get home from work, since many of our highways and interstates will be closed.  Hmm.

Anyway, the thing will strategically be happening in several areas, including mine.  This means that all walks of life will invade our small town and no doubt create chaos.  For a wife and mother of officers, this is not comforting.

What I really want to address here, however, is not just the eclipse itself, but what it could represent.

Is it possible that this natural phenomenon will usher in what the Bible calls the Tribulation period  and Christ's return?  From what I've read, another total eclipse will take place seven years from this one.

Put that tidbit together with other things happening - wars and rumors of wars (Matthew 24:6)

People (who are) lovers of themselves, lovers of money, boastful, proud, abusive, disobedient to their parents, ungrateful, unholy, without love, unforgiving, slanderous, without self-control, brutal, not lovers of the good, treacherous, rash, conceited, lovers of pleasure rather than lovers of God— having a form of godliness but denying its power, etc. (2 Timothy 3:1-4)

And then there is the old...I will show wonders in the heavens above and signs on the earth below, blood and fire and billows of smoke. The sun will be turned to darkness and the moon to blood before the coming of the great and glorious day of the LORD.  (Acts 2:19-20)

Also, if you know anything about your Bible, the number "7" has meaning.  When it talks about the tribulation time, we know that it lasts 7 years.  But perhaps adding to this, I ran across interesting information written by Michael Snyder, a Republican candidate for Congress in Idaho's First Congressional District.  Though I cannot confirm his figures, it does, however, give food for thought:


"When it comes to Trump, there seems to be so many of these 'coincidences'. For instance, on his first full day in office Trump was 70 years, 7 months and 7 days old, and that just happened to take place in year 5777 on the Hebrew calendar.
And here are some more extremely strange numbers that I discussed in a previous article:
If that isn't enough to make your head spin, here is another take on the consecutive eclipses according to Unsealed and their article entitled, The Divine Message of the August Eclipse:

"It's been noted that the United States is the wealthiest, most powerful, and most influential Gentile nation.  It is also the world's ethnic melting pot and hosts a proto-world government in the form of the United Nations.  Lunar eclipses (blood moons) are omens for Israel whereas solar eclipses are omens for the Gentiles.  The 7 year Tribulation is also known as the Day of the LORD when God enters into judgment with the Gentile nations.  The fact that two total solar eclipses, spaced seven years apart, cross the entirety of the contiguous United States, and form an 'x' over the chief Gentile nation on earth should give you pause."


With that said, we go back to God's Word which tells us  "But about that day or hour no one knows, not even the angels in heaven, nor the Son, but only the Father." Matthew 24:36

So, whether or not the Lord is aligning the heavens for His return, or this is just another solar event we have privy to, one question remains:

Articles noted:
Did a Novelist From the 1800s Warn Us Donald Trump Would Be 'The Last President'?
The Divine Message Of The August Eclipse

Steps to Having Peace With God