What An Awesome Time to Be An American, But Better Yet, a Christian!! 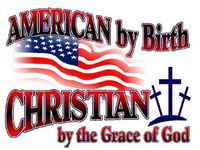 Hey there friends.  I am totally pumped after last evening's State of the Union Address!

President Trump was on point with his words, produced wonderful examples of the heart of this nation, resiliency, strength, courage, and compassion to those who aren't even citizens.

Without giving air to the negativity which resided on half of the room last evening, I want to say, that this is such an awesome time to be an American, but better yet, a Christian!!  Why?  Because we have a leader who has brought back strength, resolve, respect for law enforcement, and respect for military.  A leader who has taken extraordinary steps for life, is giving back to families, and who has honored and recognized Israel as God's chosen nation.  Exciting times indeed!!

It is my belief, and has been my belief, that God has raised this man up for such a time as this, just as He did in Old Testament times, in order to bring change, prepare a nation, be a key piece in the Kingdom agenda, and perhaps even sprinkle a bit of grace on those who are earnestly seeking Him and praying.

But here's the thing...it is exciting times to be a Christian as well.  Never before, do we have access to hundreds, thousands or more people, at our fingertips, through the channels of social media.

Never before have I heard of regular Bible studies taking place in "the people's house" - the White House, guiding our leaders and giving them God's wisdom.

Never before have I seen people seeking the Lord and recognizing that it is He who is righting wrongs, making ways, exposing darkness and promoting truth.

Never before have we been so close - so close to Christ's return than where we are today.  He could come at any moment and life as we know it could change in an instant.

Never before have we seen so many signs and wonders in the heavens as we have over the last couple of years.

These are exciting times, my friend, and I would challenge each of you to seek God's will for your life, and how you can make the most impact for Him in this wonderful window of opportunity.