Keep Calm, It's Just My Opinion on Ferguson, Football, Police, and Politics 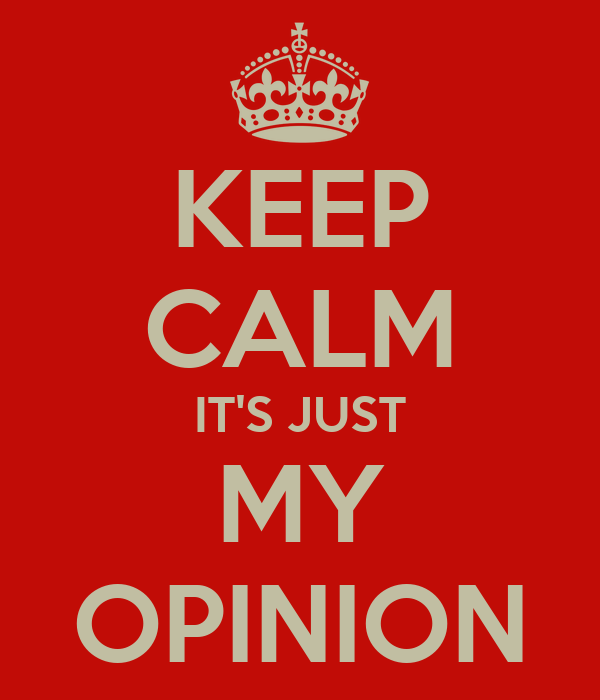 Through all the Ferguson unrest, I've been relatively quiet; an excruciating thing for a writer/speaker, I assure you.  Now, with the latest "bad policing" story coming out of New York along with another backlash of protests and angry mobs, I've decided to weigh in.


Trust me when I say, these are my thoughts....my opinions....my words.  If you do not agree with them, then thank God for giving you and me the opportunity to think freely and express ourselves in different ways.

1.  Enough of the cop bashing.  Whether we like them or not, they are here for a reason - to bring peace and civility to a world that is teetering on total chaos.  Have you stopped to think for a moment what kind of world we would live in if there were no law enforcers...no laws...no barriers to lawlessness?  I assure you, the problems we are seeing would only be child's play if there weren't people willing to sheepdog all of us crazy sheep.

I find it ironic with stories like the news anchor who published the address of Officer Wilson, calling on police to help her after receiving threatening feedback. Read story here

Though I'm sad that someone felt the need to lash back at her in retaliation, it does reflect much of the behavior we see in today's world.  Those filled with hatred and bigotry are the first to turn to law enforcement when they find themselves over their heads in trouble.

Perhaps instead of trying to constantly find the bad in our officers - to expose and bring harm in some way to them, maybe we need to encourage them.  They have a tough job and no one can truly understand unless you or I have put on that uniform and been placed in situations that present a potential threat to the officer's safety or those around him or her.

Cop bashing is only driving the wedge deeper.  For those continually caught up in it, it does not help your cause.  It does not give law enforcement warm, fuzzy feelings towards you or me or anyone else.  They are human and like all human beings, they feel the sting of your words, actions and threats......and they remember.  Thankfully, most of them will still go out of their way to help you or me even after they've been assaulted both physically and mentally time and again.  Incredible withstraint.

2.  The race card is getting old.  There is only one race - the human race.  Whether we are African-American, Caucasian, Indian, Asian, etc., we are made up of the same DNA.  Are there people who are "bullied" because of their skin color?  Absolutely.  It's wrong and in the Bible it's called sin.

In God's eyes, we are all created equal.  No one ethnic or people group are better or more superior.  It seems, though, that for those who constantly bemoan the fact that they are put down, picked out and left out because of their outward appearance, are not as much involved and concerned with helping others understand where they are coming from peacefully, as they are presenting a sense of entitlement with an arrogant and ever-growing chip on their shoulder.

Again, people might respond much more positively if it was done without all the drama. Remember, we can't force people to like us.  Likeability is something that is earned through character, respect and hard work.  There once was a golden rule that I was taught as a child:  Do unto others as you would have them do unto you.  Truth right there. Perhaps we should revisit it.

3.  Retaliation out of anger is sin.  Whether you or I agree or disagree with the outcome of the Ferguson matter, the New York "choke hold death" or any other situation, it does not give anyone license to loot, burn, kill, mame, verbally assault, wound, destroy, or retaliate in any way.

What good does it do to burn down a community or bludgeon someone with hammers?  Does that truly bring vindication?  What about the younger generations?  How is this teaching them to respect others....to respect themselves?  How does a person feel once they've stepped across that line between right and wrong?  I'm guessing it just elevates the bad behavior all the more.  They adapt an "I don't care, I'm too far gone" attitude, which is a lie from the evil one.  Sorry, but people who fall into this trap have been duped.

What we need is repentance.  To come clean before God and admit attitudes and actions that you or I have taken out anger, were wrong.

The destruction and devastation that have been caused by this ill behavior is unacceptable and displays a depraved nature where self is supreme and a warped sense of civility and general respect for others is laid waste.  What a shame.

4.  Beware of some of these so-called "Reverends".  They are nothing but wolves in sheep's clothing.  Al Sharpton has been strutting around like a little banty rooster, stirring up those who refuse to think for themselves.

For example, he "preached" last Sunday at a church in St. Louis, which I'm assuming the rhetoric never included a message of hope and salvation; a message of repentance and God's sacrifice for sinners.  No, instead, he "vowed to keep pushing for a federal investigation into Brown’s death."  How this must sadden our Lord as this man spreads his venom and own personal vendetta to those who are willing to buy in to his nonsense.

Mr. Sharpton, think about the influence for the good you could have if you would turn that hate into hope - God's hope.  True men of God do not stir the pot, but instead serve out of it.

Let's be reminded of the verse in Matthew 7:15 which states, "Watch out for false prophets. They come to you in sheep's clothing, but inwardly they are ferocious wolves."  Amen.

5.  A football team who has to promote evil to improve ratings is not much of a team.  Seriously.  The show of disrespect on the football field in the midst of a still festering wound is completely unbelievable.  See story here

Again, who was it that this team called when protesters showed up at one of their games...um....let me see....the police.  Yet as a show of solidarity of bad behavior, they distastefully joined in the mix.

It's a shame when a ball team must improve their ratings with a bogus show of support.  The raised hands along with the "Don't shoot" verbiage was carefully orchestrated (as was proved by the Grand Jury in Ferguson) in order to cover up poor choices and sinful behavior of a certain individual.

Instead of celebrating a lie to improve ratings, wouldn't it be more productive to show integrity within their lifestyle both on and off the field?  That would send a much stronger message to so many who look to these individuals as role models.

Finally, I will end my "call out" with this one:

6.  Leaders such as Eric Holder and the President, who villainize accountability, truth, integrity and peace keepers, and instead support and promote radical, unethical, unconstitutional, and ungodly behavior,  are in the position of bringing God's wrath and judgement not only upon themselves, but on those they are leading.

It's gotten to the point of being almost laughable if it wasn't so sad.  Our nation's government is out of control and for whatever reason, God is allowing them to have free reign at this moment in time without consequences to their actions.  However, thankfully, for those who have read the Book, we know that time will eventually come to a close, and they will have to answer for their actions.

My prayer is that both of you will repent and turn from your wicked ways.  You are out of the will of God and are seeking your own path.  You neither care for Him nor the people you serve, only yourselves and any way that promotes your radical agenda.

You have done nothing to promote goodness and well being in this nation for as long as you have been in office, but have resigned yourself to political rhetoric, bullying tactics and arrogant rants.

Repent.  Turn from your wickedness and right yourself with the Lord.  Then, He will hear from heaven, forgive your sins and heal our land.


It is time that we as a nation buckle down and begin repair work instead of constantly whining and bickering.  There are too many good men and women who have fought and died for this country to just let it rot and waste away.

We need to get back to our Christian roots and once again teach our children what it means to work hard, honor truth, respect others and lead with integrity.

With that off my chest, I will now commence in more uplifting and encouraging blog posts.    Thank you for your patience.