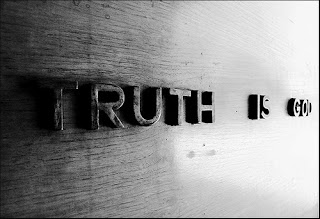 I am simply amazed by the lack of truth in today's society.

We can turn on the news or read endless posts by credible and incredible sources via Facebook, and begin to form our opinions on topics and situations without really ever knowing the whole story.

What's even more puzzling is the fact that multitudes will protest and riot about something they think to be right or something they've heard to be this way or that way, when in fact, they know nothing comparatively.

In John, Chapter 18, we get a glimpse into another time when truth was nowhere to be found.  Jesus was on trial because of lies instigated against him.  He was brought before Pilate, the Roman Governor.

The Jews were demanding a quick sentence of judgment, yet Pilate was having a hard time finding even a hint of wrongdoing by this man, Jesus.

"What is it you have done?" he asked.

Jesus very humbly yet with a deep resolve responded, "My kingdom is not of this world.  If it were, my servants would fight to prevent my arrest by the Jews.  But now my kingdom is from another place."

Confused by his response, Pilate retorted, "You are a king, then!"

And here is where truth became hidden and a blind man failed to see....

Jesus answered, "You are right in saying I am a king.  In fact, for this reason I was born, and for this I came into the world, to testify to the truth.  Everyone on the side of truth listens to me."

"What is truth?" Pilate asked.

Indeed.  What is truth?

Jesus very clearly explained it when he said, "I".  He is truth.  He speaks truth and His sheep know His voice!

Paul reminded us in 1 Timothy 4:1-2 that truth would become a lost commodity.  We read...

"The Spirit clearly says that in later times some will abandon the faith and follow deceiving spirits and things taught by demons.  Such teachings come through hypocritical liars, whose consciences have been seared as with a hot iron."

The times in which we are living...the lack of truth, the hatred of good, those with seared consciences and lying tongues, are playing out according to scripture.  We see them all around us.

"Brother will betray brother to death, and a father his child. Children will rebel against their parents and have them put to death.  All men will hate you because of me, but he who stands firm to the end will be saved."

Today, friend, don't be disheartened at the lack of truth.  God said it would happen and He has a plan through all of it.  A plan to bring redemption and restored TRUTH!  Now that is something to cause a stir about!