Trump...America's Scapegoat for All That's Wrong in the World 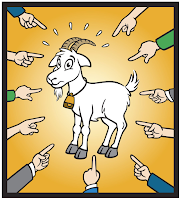 Here we go again.  The media spinning stories, and folks on both sides of the fence mudslinging in the streets over this latest incident in Virginia.  This is the latest thing, right?  I can't seem to keep up.

I've read several takes on this sad mess and how it always has to be Trump's fault.  How can a protest turned cowardly act resulting in a woman's death and multiple injuries, not to mention the deaths of two Highway Patrol officers, be Trump's fault? Do we not take ownership of our own actions anymore?

Sometimes I feel like instead of the "Greatest Nation on Earth", we have become the "Whiniest Nation on the Planet".

It's no secret there are a number of ticked off people still licking their wounds after Trump's sound defeat last year.  Folks don't like the way he lives up to what he says.  Truly, it is so un-politician like.

The haters and whiners know no other tactic than to complain and lash out over anything and everything, including playing the blame game when things such as this take place.  Oh, yeah, by the way, I just read that many do not like the fact that Melania and Ivanka wear heels.  (Slapping my forehead here)

What all these silly fires in the daily media represent is nothing else than a distraction tactic.  The thought is, "If we can get people so re-focused on all these crazy things...if we can get all these hate groups riled up over something...if we can get more and more people to divide and hate and lash out, then Trump will go down as the worst President in history."  Perhaps it's even darker than that.  There are those sad individuals out there who would truly love nothing more than to see us topple.  I guess misery loves company, eh?    But what's got me most - what is really incredible, is how Trump has become America's scapegoat for all that's wrong in the world.

First of all, God is still in control.  The Bible tells us that He deposes kings and raises up others.

I firmly believe that President Trump was placed in this position, at this time, for a special purpose.  That doesn't mean everyone will agree, but it does mean, that this man cannot be moved or removed unless God says so.

Second, the media will lie to you and me, and does so regularly.  From black lives matters group shenanigans to the troubles with North Korea, nothing...NOTHING they say can be believed as full gospel.  They spin it always to draw attention and work in their favor, whatever that may be.

Third, hatred never wins battles.  The more descension and strife we conjure up within our borders against this group or that, will only weaken us, not strengthen.  If we truly want to see positive change, then be positive!  Quit fighting.  Start taking responsibility.  Stop complaining.  Start supporting (good).  And finally, put others needs before your own agenda.

And for Pete's sake, leave Trump alone.  He has left a cushy lifestyle for one of frustration, difficulty, little support, continued scrutiny, etc.  Let's give him an opportunity to do the job God has called him to.

I guess all I can say to this is... as for me and my house, we will serve the Lord...and pray for Trump.