The Shockley Decision and A Call to Repent 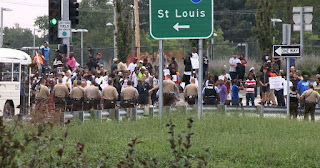 The anticipation has been building for some time.  This week, the line of defense put in place as an added layer of protection against hatred that will surely spill out.

The verdict in the Jason Stockley case finally announced this morning -not guilty.

You know, I had chosen this time around to not really pay much attention to this particular story.  I really didn't want to think about another Ferguson, but yet I awoke with a pit in my stomach as if a dark cloud was once again descending on an area already torn apart by so much hatred.

I had gently questioned my husband the night before, "Will you have to go?"  Thankfully, the answer was in our favor.

This morning I thought of all the others who didn't have that luxury, those who will strap on that vest, put on those boots and pin on that badge and head into the fire pit - this broiling pot of anger, unrest and unbridled sin.

Their loved ones will sit at home and worry as they try to make the day and evening's routine just that, routine, in the midst of all the outcry.

These officers had nothing to do with that day...probably most didn't even know Jason or the man he shot.  Yet, they will take the brunt of the wrath from an angry mob over something they had no control over. But sadly, that has just become the norm for our men and women on the front line.

As I have sat and observed all of the emotion of this morning's announcement, I also thought about the family who lost their loved one in this situation.  Regardless of whether he was guilty or not guilty of a crime, to them, the case is not resolved.  To them, their loved one is still gone...the hurt still there.  They cannot see beyond the incident because it's all they have. They and many from their community feel betrayed and overlooked.  I have had discussions with a number of them over situations like this, and the anger and hurt run deep.

For Officer Stockley, I'm sure he is relieved yet wearied.  It is finished.  He can return home, but probably never return to law enforcement, and never really embrace "normal" again.  This case will forever be ingrained on his thoughts, and he will probably always feel the urge to look over his shoulder.  If I was a betting woman, I would say there is probably one thing that cannot be a truer statement...he did not set out that day looking to take a life.

As some of the "religious" leaders who have helped stoke the flame of unforgiveness and anger, they will most likely wink in the direction of ungodliness today and the days to come.  By their words of divisiveness,  they have set aside the love and grace of Jesus and instead promoted the pride and arrogance of the Divider.  The Bible says, "Whoa, to you..."

So where do we go from here?  Unfortunately, this incident and probably many more in the future will only continue to drive a wedge and promote the very thing on both sides that neither want - animosity and hatred.

There is really nothing anyone can say to heal the wounds.  There is no step that can be taken, no training instituted, no statue taken down, no words erased, no history ignored, that will honestly heal what is happening here.

Abraham Lincoln quoting a verse in Mark 3:25 said, "A house divided against itself cannot stand."

This house - our nation, but more importantly our own person, will not stand if we continuously thrive on hatred and division.

It is time to set aside this ugliness...to put aside our differences but also our sinful hearts.

The fact that no-one is talking about is S.I.N.  You won't hear about it on CNN.  It won't be talked about on FOX news. Heck, it's barely talked about in the church these days.

Yet, we, all people, have got to stop acting out in our stubborn, prideful will.  Revenge looting, burning, hateful slurs, anger against our brother, cheating, stealing, killing, on and on and on is sinful behavior, which is the crux for this whole situation to begin with.

I know it sounds cliche and probably naive to so many (and that's okay), but without Jesus, our hearts will continue to grow darker and darker, creating more hatred and more hurt.

As for this particular situation...well, I will not elaborate on my thoughts, it doesn't matter in the grand scheme of things.  What matters is that we repent and seek God.  He's the only option for such a depraved world.

Trudging on and praying for all...
Kristi