As many of you know, I was invited to speak at the National FCPO Conference last weekend in Deland, Florida. Besides the fabulous weather, beautiful beaches and awesome hospitality, we had the opportunity to meet so many new friends, and feel God's presence throughout the whole event.

Since several of you have asked me for a copy of my message, I figured it would be just as easy to post it in blog form with a quick recap of what was talked about.  So without further adieu...


"How does a person decide who to marry?"
"No person really decides before they grow up who they're going to marry.  God decides it all way before, and you get to find out later who you're stuck with."  - Kirsten, age 10

"How would the world be different if people didn't get married?"
"There sure would be a lot of kids to explain, wouldn't there?" - Kelvin, age 8


Marriage is serious business.  It is so important and was one of the first things God instituted.  I like to think of marriage as a race.  We can either drop out of the race when things get too burdensome and hurtful, or we can keep on going even if we have to hobble.  Finishing what we started gives the satisfaction of knowing we ended well and pleased God in the process.

Derek Redmond was a runner in the 1992 Olympics in Barcelona, Spain.  He was set to run the 400 meter relay, but just 250 meters shy of the finish line, Derek tore a hamstring.  In agony, he fell to the ground.  At that point, he had two choices.  He could either get up and quit the race, or he could get up and hop the rest of the way to the finish line.  That's exactly what he did.  As he rounded the corner on one foot, an older gentleman came down out of the stands.  He put his arm around Derek and helped him finish the race, all the while uttering encouraging words to help him on.  The man was Derek's father.

I believe this is a picture of how our heavenly Father wants to support us.  If we allow Him to, He will come alongside and help carry the weight, all the while encouraging with a, "You can do this!" 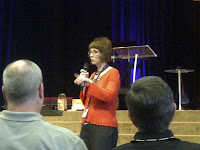 Somehow, though, this nation has become a disposable society.  If at anytime something we have breaks or no longer fits our expectations, we just toss it aside and get another.  This is not how God designed the marital relationship.

Looking all the way back to Genesis 1, we see a time when there were no cell phones or ipads.  There was no crime, therefore there were no interrupted meals or stressful situations to contend with.

There were no stinky uniforms to wash; no distractions from the office or bad guys to fight.  There was no Twitter or Facebook to air our problems and waste our time.  It was a perfect world.

God had created a holy covenant between two very different people to bring Himself glory and to mirror the coming relationship between Christ and His church.  What a difference we see today!

Somehow, we've taken something so important - so God-ordained, and made it into a flimsy piece of paper that means something like, "If you or I decide this thing is just not working out, either one of us can leave at any moment."

Law enforcement marriage or not, it all boils down to this - we are either living our marriages out through Christ, or we are living them out in the flesh.

Genesis 1 & 2 describes what marriage was created to be.  In a short synopsis, God created man then said it was "not good" for him to be alone without a companion and mate.  So He created woman, and she was different from the start.


Now this began the beginning of humankind.  These two people had entered a holy covenant together with God as their glue.  It was binding agreement for life, and only death would, could or should separate them.

With two different people, though, come differences.  Differences of thought on child rearing, how to handle money, what quality couple time looks like, thoughts on religion, politics, etc.

Just as God said it would happen (after the fall of man) in Chapter 3:16, a power struggle ensued.  Woman would desire her man, but he would rule over her.  Those differences which were originally meant to compliment one another, would now cause us to knock each other out!

So why are we losing so many out of the race?  Why are couples falling behind and dropping out?  Sin.  What is the solution?  A Savior.

1.  We need to throw off all that hinders us.  Many of us deal with "All about me" attitudes.  We talk bad about our spouse to others instead of protecting and building them up.  We fail to make time for intimacy and communication with our spouse.  We overindulge in material things, thereby placing ourselves in financial bondage.  And lastly, we fail to make time for God.

2. We need to run with perseverance the race marked out for us. We've all been called by God to a particular task or vocation.  We need to figure it out, then run that thing...together.  Two become one and now we must support each other in whatever endeavors God calls us.  We run the race together.

4.  We need to consider Christ.  When the road gets tough...we need to think of Christ and all He suffered for us.  It always puts things back into perspective.  Plus, He will help us along our race.

Finally, I will close this blog with a quote I found on Pinterest.

"Marriage.  If you want something to last forever, you treat it differently.  You shield it and protect it.  You never abuse it.  You don't expose it to the elements.  You don't make it common or ordinary.  If it ever becomes tarnished, you lovingly polish it until it gleams like new.  It becomes special because you have made it so, and it grows more beautiful and precious as time goes by." - F. Burton Howard.