This past weekend, Rick and I had the privilege to attend the "going home" celebration for a fallen Illinois State Trooper.

Trooper Kyle Deatherage was hit and killed last Monday morning by a tractor trailer, as he stood next to a vehicle on the shoulder.  Tragically, he left behind a young wife and two small children, as well as many hurting colleagues, friends, and family members.

I had never been to a police funeral before, though I'd seen several of them over the Internet.  I can assure you, I was not quite prepared for the overwhelming show of love and devotion by fellow officers and other law enforcement personnel and their spouses.

The parking lot was overflowing with police cars from states as far away as Alaska to townships as close as a couple of miles.  Many had known Kyle, but others were there for sheer support of the brotherhood. 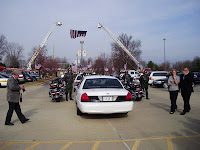 U.S. flags lined the parking lot and two fire trucks with their ladders extended, hung Old Glory for all to pass under.

Within the school building where the ceremony took place, a sea of blue, black, green, grey and brown mingled in their polished shoes and and shiny brass.  Each one, I'm sure, feeling a bit of the weight of losing yet another comrade in the line of duty.

After a couple of hours, we were instructed on how to line up.  The procession on foot into the gymnasium was met by a line of Kyle's co-workers standing at attention in respect of those who serve, and the one whose shift was forever ended on that fateful day.

Row after row, the officers, spouses, and law enforcement personnel filled the bleachers.  The eery silence - all except for the footsteps, was almost deafening.

In front, the casket lay draped with the American flag, while a sketched portrait nearby looked out at the crowd.

The air, though tinged with sadness, was not one so immersed with mourning.  No, Trooper Kyle was a believer, therefore, the promise of new life permeated the atmosphere.  Our Lord tells us in Psalm 30:5, that "Weeping may remain for a night, but rejoicing comes in the morning."  Kyle had made his peace with God and had trusted that Jesus was and is the only way to eternity with Him.  It is our joy knowing that this young man is experiencing the fullness of Christ, and the legacy he has left behind is rich indeed.

I couldn't help but notice his beautiful wife as she stood by his earthly vessel and gently laid her hand on the flag.  I wonder if her thoughts were something like, "This is not good-bye my love, just see you later."?

After the ceremony completed, just as before, each law enforcement officer, spouse, chaplain, etc., filed single file out the doors as silently as they had come in, and the rows began to form outside the school doors for one last chance to escort this officer on his final ride.

The sun shone brightly and a low-flying plane circled the airspace.  The wind, though warmer, had a hint of December's chill.  Bagpipes began playing as the casket was brought out and carefully placed within the hearse. 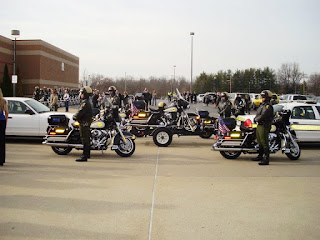 One by one, each dispersed to their awaiting car.  A police motorcycle unit lined the sidewalk in pristine form.

Almost on cue, each car lit up like the Fourth of July, and slowly, filed in behind the other.  For miles, all a body could make out was a line of comrades escorting their fallen brother home.  As Kyle's biological brother put it, "Lights and Sirens!  He loved lights and sirens." 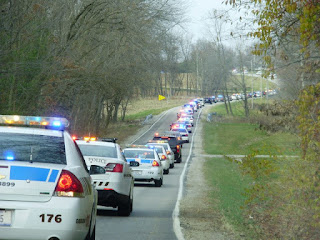 Lined up along the route, people waved flags and crossed their hearts.  Many older men saluted and women dabbed their eyes.  People cared, and for that I was deeply moved. 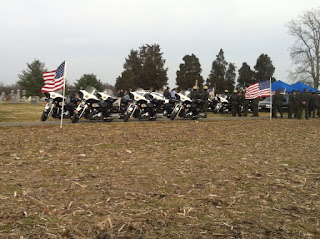 Slowly, we pulled into the cornfield next to Kyle's resting place.  Again, row after row, his brothers lined up with not a word being spoken.  It felt as if I was in the midst of a grouping of toy soldiers, as the orders were called out, and the salute was offered up.

The cold winter wind began to blow, and almost as if on que, I noticed one lone grey hawk seemingly hovering above the place where he was to lay.  Circle by circle it made its flight until finally, it flew off into the distance.

The bagpiper played Amazing Grace and buglers followed up with a rendition of Taps.  A volley of firearms cut through the silence and it now seemed so final...so tragic.

The ending call was from dispatch over a loud speaker calling out Kyle's badge number.  Of course, no answer.  His shift was now over and he was given over to the angels.

After my senses had been assaulted on so many fronts, this police wife was proud to be a part of a family so true to one another.  And for Trooper Kyle Deatherage...his final ride was incredible!

God bless all our officers - those still fighting the good fight and those who've taken their final ride.  May God's presence be with you and comfort you until your journey too has ended.
Kristi