Time to Leave the Stronghold 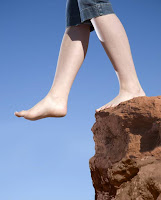 Spending hours in the car traveling to D.C. and back, I had ample time to dig into God's Word and let it wash over me in a fresh new way.

During one of the many hours of travel, I stumbled across a passage in 1 Samuel 22:3-5 that reads...


From there David went to Mizpah in Moab and said to the king of Moab, "Would you let my father and mother come and stay with you until I learn what God will do for me?"  So he left them with the king of Moab, and they stayed with him as long as David was in the stronghold.  But the prophet Gad said to David, "Do not stay in the stronghold.  Go into the land of Judah."  So David left and went to the forest of Hereth."  (NIV)

David was on the run from King Saul who wanted him dead.  Even though David was being pursued and tormented by his enemy, God had his hand on David and blessed him wherever he went.  People flocked to him - those "in distress or in debt or discontented," in order for David to be their leader.  Yet, God told David to leave the stronghold and go into the land of Judah.

Have you ever wanted to hide away from the enemies of this world?  Maybe it's easier to stay in the comforts of your home, church, your community, job, etc., instead of leaving that place of familiarity and strength, and going into a place that God has set before you.

I learned that lesson this past week.  It is definitely not my comfort zone to go up to total strangers (especially those in uniform) and ask them if they would like a Bible.  It's not easy for me to step up and talk to people one-on-one that I've never met.  Yet, God made it clear that I was to leave my stronghold - my place of comfort, and go.

Just like David, I would never have received God's blessing that awaited if I hadn't been obedient.  So what's your stronghold?  Where is God calling you or what is He asking you to do?

Perhaps it's following Him for the first time.  Maybe He's asking you to leave a job and take up a new one.  Or, could it be that He's wanting you to step out and share your faith with someone?

Whatever it is, there is blessing on the other side.  You just have to get up and get moving!

Blessings to you this week outside of the walls,
Kristi