Standing Firm When the Walls Crumble 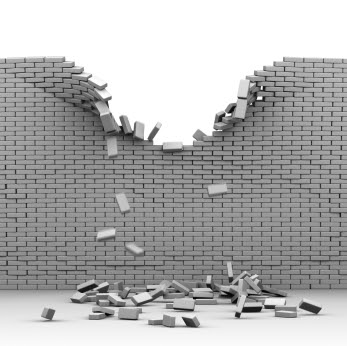 I don’t know about you, but I’ve experienced crumbling walls. It’s not a pretty picture…especially if you’re the one standing underneath!

Being the wife of a police officer for 25+ years, I have come to recognize that his job is God-ordained. It’s not often thought of as that…why, turn on any news station and all one hears is the tearing and ripping apart of our police. No-one wants to be held accountable these days.

Romans 13, however, describes an officer’s job. As you peer into the lines that God spoke and Paul wrote, we see that “There is no authority except that which God has established. The authorities that exist have been established by God….For he is God’s servant.”

If it’s God-ordained, then it’s a good thing, right? Whoa there Nelly! With this high calling, come stresses. How about anxiety and depression? Try temptation, financial worries, and fear on for size. These are all emotions that the officer can experience throughout his or her career.

According to the Officer Down Memorial Page, there have been 13 officer deaths so far this new year! I may be stepping out on a limb here, but chances are the thought of “could it be me next” must cross their mind a time or two.

So ladies, what do we find happens? They clam up…most of them, anyway. Normally, cops don’t talk. Part of it is the nature of the job. They simply cannot tell us everything that is going on. The other part is that it is hard to express to someone who is not in the same world, the stresses of the job. It’s as if they would have to leave the security of their “normal,” in order to describe what they experience.

With all that inner turmoil, the wife is suddenly left feeling unloved, unappreciated, lonely, and resentful. She might notice that he no longer has time to just sit and talk. Even when he’s home, it might be that his thoughts are a million miles away, leaving her to feel unnoticed.

I know there have been times in my own life when I’ve began resenting the job. Resenting all the time that others are getting when I am in need of him at home. Tough spot. Walls begin to crumble.

If I could have a dollar for every time we went to a restaurant and, you know the routine, he sits with his back against the wall with me in front…eyes scanning, scanning. Oh, and it doesn’t stop there! What about church, for heaven’s sake? Same thing.

So what happens? F R I C T I O N! You guessed it. Bricks and mortar are now barreling down between the two. Someone’s going to get hurt.

In the ancient world, there were two great cities…Ninevah and Babylon. Both had great walls around them and attitudes to match. Babylon’s walls were over 350 feet tall and even encompassed one of the seven ancient wonders of the world, the hanging gardens. Their walls had not been penetrated for something like over a 1000 years and they felt on top of the world…undefeated.

Don’t we often get that feeling with our marriages? Oh, it’s okay. We’re solid. Nothing can destroy us. He loves me, I love him. The kids are okay. Then before we know it, the wall begins to crumble.

What happened to both these cities can happen to us. They fold in a matter of hours, and the enemy moves in.

The more I meet and talk with police couples, the more I’m seeing a pattern. Imagine two circles on opposite ends of the spectrum. The left circle represents him. He has his police world…his thoughts, his temptations, etc. The right circle represents her world…stress of the kids, needing to feel loved, etc. However if you look, there is nothing in between linking them together. They are separated by a great chasm of chaos, and left feeling empty and misunderstood.

However, God instituted the extraordinary relationship…the three intersecting rings of harmony within a marriage. The first ring on the left is the husband, which connects with the middle ring of God, which connects with the right ring of the wife. Together, they stand strong and firm, able to resist the flood of emotional distractions and outside temptations that can destroy a wall.

We read in Ephesians 5:25 that husbands are to “love their wives as their own body and as Christ loved the church.” They are “not to be harsh with her,” (Colossians 3:19) but to “be considerate and treat her with respect.” (1 Peter 3:7)

If both partners are living for God first and foremost and then living to please one another, the wall will stand firm.

So, with all that said…build your home today on the rock. That way, your walls will have no problem standing the test of time.