Can God Bless America and Her New Found "Freedom"? 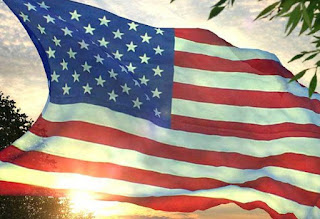 What do you think?

We sing about it...God bless America, land that I love...

This weekend (July 4th), we will wave flags, watch fireworks, barbecue chicken, and perhaps break out an apple pie (wholly American), but does it all really mean anything?

Can God bless America in the direction we are going?  Will He bless our blatant sin?

Do we even care?

Let's take a look back at a young man and his new found freedom.  We will call him, "John".

John was a young buck, probably 17 or 18 years old.  He'd been raised in a good home where manners and respect for his father were taught, though I'm sure it was not a perfect household by any stretch of the imagination.

John's parents made sure to give him more and more responsibilities as he grew, so he would eventually be able to walk on his own two feet and make wise decisions.  He was also given a promise - when the time came, after many years of faithful service to his family (the father in particular), he would inherit a vast reward.

However, John grew impatient.  He wanted the reward now.  Didn't he deserve it?  After all, he was a young man with the world at his fingertips.  Wouldn't his father truly want him to be happy?  And so, John went to his father and asked him for his inheritance early.

John's request grieved his father.  He knew that his son had no idea the trouble he could find himself in with such a large bank roll.  As he carefully mulled over the son's demand, he saw John's youthful pride and how his heart was far away from what was good and right.  This caused the father so much hurt.  He loved his son, yet, though it was against what he knew was best, he complied and gave the boy his inheritance and sent him on his way.

The boy was delighted.  Beyond ecstatic!!  He was now a man and had the financial freedom to go and do what he wanted without anyone telling him what to do.  He would travel and see the sights, so off he went into the wide-open countryside, to celebrate and indulge in expensive living.

Parties.  Girls.  Extravagant lifestyle.  He did it all and left no stone unturned.  However, there came a time when the money ran out.

His so-called "friends" were no where to be found, for they had used him until nothing was left.  He was now a "has-been," left to literally slop hogs just to put a little food in his stomach.

One day when the hunger pains had gotten the best of him, and as he watched the dirty pigs rooting around in their filth, he came to his senses and remembered his home...his father...a time when all seemed right.


He thought to himself, "What am I doing here?  I am starving and slopping hogs while my father's servants back home eat to their fill.  I will go back and say to my father, 'Father, I have sinned against heaven and against you.  I am no longer worthy to be called your son; make me like one of your hired men.'"

John got up and walked all the way back home - quite a long distance.

"While he was still a long way off, his father saw him and was filled with compassion for him; he ran to his son, threw his arms around him and kissed him."  Then he called for his servants to quickly bring the best robe for his son's weary bones, a ring for his finger, and sandals for his feet, as well as a fatted calf to be brought and slaughtered for a feast in his son's honor.  His son had returned!  He had gone from death to life - wickedness to repentance.  What a time of celebration!!

So how does this story relate to God blessing America?

We are the wayward son.  We were once protected and well cared for.  In return, we were asked to fulfill our responsibilities and respect the Father.

Yet, in our pride and arrogance, we have demanded our own way.  We want to party...live according to our own rules and boundaries....make merry with everyone and embrace whatever goes.

Eventually, however, the time will come when the "freedoms" run out.  Misery will be our company and our filth and hunger be our mainstay.

My prayer is that we will "come to our senses"...to wake up before it is too late, and are consumed by our sinful choices.

God, though heartbroken over our sin, allows us to go our own way; to make a mockery of all He has given to us, but thankfully, He is always ready to redeem!  Just like the father in the story, God is always watching and waiting for our return.  Upon our repentance, there will be a celebration in heaven like none other.

America...God can bless again, but we must repent and turn back to Him.  Then and only then, will He say, "For this son of mine was dead and is alive again; he was lost and is found." Luke 15:24