One Officer's Choice Between Racism and God 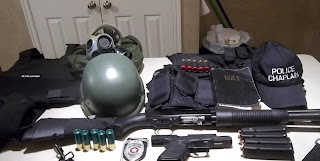 Yesterday, I had the great privilege of speaking with Amber, Oklahoma's first black police chaplain, Kenneth Wise.  His story is one of positive choices, attitudes and actions rarely seen in the media today.

I would like to share a small snippet of that conversation below.  It truly goes to show that racism is taught and that hatred can be overcome by love.

Kenneth Wise grew up in Chicago on the rough, west side of the city.  Back then, just as it is today, the police were not well liked, yet even as a youngster, Kenneth would play the "cop" role while entertaining his young friends.

At 16 years of age, Kenneth dropped out of school and left home to join the military. Though he was not of age, he lied so as to get in on this new adventure and give his momma a break from another mouth to feed.

While serving our country, he met a guy from from Alabama who had never seen a black man before, but come to think of it, the only white folks Kenneth had come across were those running a store, collecting rent, teaching a class, or coming to lock someone up.  Yet, as time went by, these two soldiers realized that neither one had reason to hate one another.  Kenneth needed him and the young man needed Kenneth, and 37 years later the pair are still good friends keeping in touch via social media.

After the service, Kenneth worked in Joliet prison for a time, until 1994 when God called him to Oklahoma, where the price of gasoline was a whopping .84 per gallon - "highway robbery" as he called it.

Now out of law enforcement and living on the east side of Oklahoma City, Kenneth began to realize that hatred ran deep within the black community.  "Why do you hate these white police officers so much," he would ask some of the locals.  The response was always the same, "they're killing black people."

Kenneth's next statement would be a challenge to us all: "Well, somebody is going to have to be the Moses!  Who told you this is not the time (to stand up and be counted)?  What are you doing to change it?"

On one particular occasion, Kenneth sat with his wife at their son's basketball game, scanning the crowds of moms and dads, children and teachers.  At that moment, Kenneth stood up and shouted, "Where's the idiot who's supposed to watch these kids?"

It was true.  At that time, there were no officers working security detail in his son's school system, so in 2007, Kenneth entered once again into police work - this time as a reserve officer.

Kenneth was 42 years old when he graduated the academy.  He began to notice that there was an even more desperate climate than just racism - there were spiritually "lost" cops  walking around making split second decisions.


He also noticed church vans coming in to pick up people for church, but the same ones failing to stop and encourage, or even offer to pray for the officers patrolling the streets.  That's when Kenneth knew that God was calling him into the chaplaincy.  For a time, he was looked at as "one of us," as he not only was the same color as those in his community, but had the training, SWAT and patrol experience as well.

Shortly after, Kenneth recalls receiving a message from God.  "I'm gonna send you on a mission," He told him.  "Another area you've never been."

He was encouraged to apply at a PD in an all-white town - Amber, Oklahoma.  Kenneth said, "I had to think about it."  But as God would have it, Kenneth noticed a sign hanging in his church that read, "Go out into your mission field."  He knew that God had different plans for him....plans that would take him out of his comfort zone and into one unfamiliar and somewhat frightening world.

Kenneth met with the Chief of Amber.  He presented him with his qualifications and certificates not really expecting much to come of it.  The Chief told him, "I don't want people working for me, but rather people to work with me."  Kenneth was sold, but his biggest hurdle would be the town council.

Half way from the station, Kenneth received word to come back.  He had passed his background checks, fingerprints, etc., and was now needed to give a photo I.D.  A week or so later, Kenneth was voted in unanimously.  God was at work.

On his first patrol, Kenneth stopped by the town gas station to introduce himself to the "elders of the town".  These men, probably 50 years ago or so, would have "strung him up," but now, all they wanted to do was extend their hand of forgiveness and friendship.  Kenneth was seeing God bringing healing out of the midst of a nation's darkest hours.

Kenneth said that he got looks - not from the white folks, but from the black officers.  He was even kicked out of 2 black chaplaincy organizations all because he had chosen to follow God and begin the mending of broken fences.

"If God calls you into an area, is it uncomfortable?  Yes!  I was one (the minority in a majority), but wasn't alone."

Kenneth says that we as Christians are called to make disciples.  "God is still making disciples.  He's still on the throne.  He will send you where He wants you to go, and make sure you are covered and protected."

We need to "be the Moses and the Nehemiah".  It is and was Kenneth's choice to set aside racism and instead embrace love.

"I do it (sharing the gospel to all), not for the one I've saved, but for the one's I've lost."  And as he quickly reminded me, there truly is much work to be done.