Fighting the Marriage War. Divorce is Not An Option! 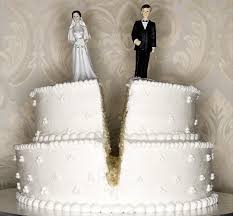 Here we go again!  I cannot seem to wrap my mind around the astounding numbers of husbands...and wives...simply walking out the door with an "I don't love you anymore.  I want a divorce." line.

From just those few words, the problem is fully illuminated....I!

For those of you dealing with an "I" problem, sit back and hold on.  There are going to be some words written here that may be tough to read and even harder to swallow, but they come directly from the throne room of God and last I checked, He doesn't compromise.

Marriage is sacred.  We as a society have got to quit making it something it is not.  It is not something disposable.  It is not to be ignored, misused, or mistreated.  It is not for the weak-hearted or the uncommitted type.

Marriage is hard work!  It takes time....lots and LOTS of time.  It takes effort....bucket loads of sweat and tears, to make it last.

This flippant attitude of "well, if it's broke, we can throw it out and get another" has got to stop. When did we become such a large group of quitters and me-centered infants?  Perhaps all of us (me included), need a refresher course on the original plan.

Marriage was created by God for man for several purposes:

Divorce was never a part of God's plan.  Why?  Look around!  How many people have been affected by its ripples?  Kids are packed up and shifted from one home to the next.  Grandparents are often robbed of watching their grand babies grow up because their mom or dad is living elsewhere and has custody.

Friends are no longer friends because of the split.  Then there is the whole mess of step this or that.  Aaahhh!!!  What a nightmare!

God knew divorce would rip families apart...would tear at the very fiber of the family.  Could even destroy a nation if the family unit was disbanded and left insignificant.  Where would stability come from?  Where would godly discipline and morals be taught?  Where would the security of a loving environment so needed to nurture young children be?

If we are honest, we are seeing the end results in our nation today.  Absent parents.  Broken homes.  Child abuse by adults in the home who are not the parents.  The overall moral decay of what marriage and family is supposed to look like.

How God's anger must seethe.

So what do I say to those who tell me, "I want a divorce.  I don't love him or her anymore?"  I tell them they need to repent.  It is a relationship with Christ that they are lacking, whether they want to admit it or not.

A marriage firmly planted on the foundation of God...

A marriage of two repenting repenters actively seeking a daily walk with their Creator, will NOT divorce.  It simply doesn't happen.

Someone who is not grounded in God;  a person who does not have God first and foremost in their life;  a marriage that is not actively concerned about anyone other themselves, has a greater chance that their marriage will fail.

What about those folks who do have a strong relationship with the Lord, but their partner has left the game?  Then exactly that...someone has moved, and it wasn't you, and it definitely wasn't the Lord.  He never moves.

So what do you do with that?  PRAY.  Find godly people who will commit to praying with you, for you, and for your spouse.  Fast.  Pray some more.  Be the example of godliness to your children and to your wayward spouse.  Don't argue.  Don't beg.  Don't be a doormat.  Shine for Christ and let Him do your fighting.  Stand for your marriage until your spouse comes home or he/she puts a ring on another's finger.  God will bless your obedience and efforts even if your marriage ends because of another's "I" problem.

Prayers for all you dear ones out there fighting the good fight, working hard to stay the course; for those standing strong and staying in the game.  You are the courageous ones.  Hold the line.  Fight the good fight.  Stay close to God.  He will carry you when all strength is gone.