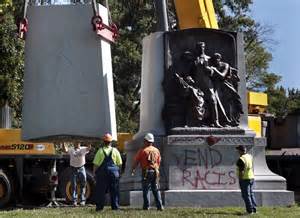 I don't know about you, but I'm beginning to think this world has gone crazy...or least part of it.

I just read (that's the problem...I read too much) where St. Louis is taking down a confederate monument in Forest Park, by the end of this month. Why?  Because a few fine folks, including the mayor, believe it is racist.

Have you people lost your ever living minds?

First of all, why are we spending tax dollars to remove a statue that has been up for years?  Why now?

Second, why are leaders and organizations in this nation becoming so afraid of offense?  They don't seem to care when it is offending Christian groups or history buffs.  Just thought I'd throw that out there.

Third, why is the city bowing to pressure of an elect few?  What about the thousands in and around the St. Louis area who appreciate our rich history?  Hello!  I've never received a phone call about this monument.  Why didn't I get a say?

Here's the thing.  People need to grow a backbone.  I was told a long time ago, that if I were going to survive, I needed to grow a thick skin.  Meaning, I can't let every little thing offend me or cause me to cower in a corner OR be a tool to step on everyone else.

If we are that sensitive about our nation's history, then perhaps it's time to find a new home.  And frankly, have these complainers even ever read history?  Did they realize slavery was not just white owners/black slaves?  I'm sure they do realize there were black plantation owners that had black slaves in this country, right?  That "scholars estimate that about 12,000,000 Africans were sold by Africans to Europeans (most of them before 1776, when the USA wasn't yet born) and 17,000,000 were sold to Arabs"? I'm sure they do.

Here's another way to look at this whole fiasco.  Just because city workers take down a statue, it does not mean that certain things did not happen.  We can try to cover it up...hide it away...refuse to talk about it, but that doesn't change the fact that it happened and it is part of who we are and where we are at this point in time.

It's kind of like God's Word.  People try every day to ignore it, re-write it, delete it, but thankfully for those of us who care, it stands regardless.  Praise God!

As for me and my household, we will serve the Lord AND we will know correct history, statue or not.