That's a Big "No" for Transgenderism in the Military 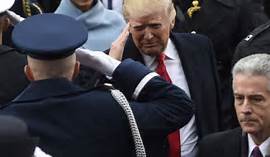 A firestorm is brewing.

President Trump announced today that after consulting with top military experts, the U.S. Government will no longer allow transgenders to serve in any capacity within the military.

Wait for it.  Wait for it.  Now!  The fall out is on the horizon and once more this President will be the target of numerous vocal protests and tongue lashings.  Yet, what the POTUS has just decided is probably one of the biggest steps back to common sense, that we've seen in at least 8 long years.  Thank you, Mr. President!

Regardless of what Hollywood promotes or general Joe population thinks, the idea of allowing confused men and women enter into a military training ground and possible war-front scenario, is not only dangerous but irrational.  Let me explain my thoughts.

First, according to a USA Today report, 46% of transgenders are committing suicide, compared with 4.6% of the general public.

This poses a huge problem if these folks are serving in the military.  Why is that?  If  they are already struggling with their identity and all that comes with it, they will not be able to stand up under the weight of combat or deal effectively with the stress factors which have affected so many service men and women over the years.

It just makes sense, that if you take an already compromised personality, and mix it with, in some instances, the trauma and extremities of military tours, you reap a ticking time bomb who may not only take themselves out, but create an unsafe environment for others as well.

Once Pandora's box is open, it is very difficult to close it again.  By allowing these folks to cross the lines - not just cross them but muddy them, there will be a break down of the ranks.  The military is not a costume party, but rather a serious training ground of soldiers who defend our nation's security.

Third, a strong military has to eliminate distraction.  With transgenderism amongst the troops, there will be continued distraction as these men and women who refuse to identify with their biological make-up demand others to deal with and accept their skewed way of thinking.  This becomes a distraction which can undermine the effectiveness of a trained military.

And finally, transgenderism is sinful.  If we as a nation based on Judeo-Christian beliefs are going to survive as a nation and protect the very fibers of who we are, we have to stand on the side of God, not the whims of man.

Yes, the public outcry to today's announcement will spill over and demand attention for a time, but this man, whether you like him or not, is standing for what is morally right as well as the best direction for our military.

I, for one, applaud him!


"So God created man in his own image, in the image of God he created him; male and female he created them....and God saw everything that he had made, and behold, it was very good."
Genesis 1:27 & 31a