Whose Finger Pointing Are YOU Listening to? 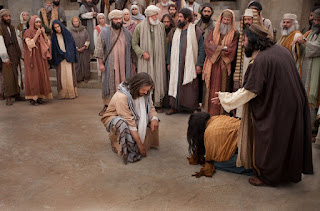 With everything going on in our nation, God reminded me this morning of an old story...
A woman was caught in the act of adultery. A woman - someone who by gender, in that culture, was looked down upon. Even more so, a woman caught in a sexual act...more-than-likely set up by a crowd of religious leaders and others, in order to trap Jesus into overlooking the incident.
As she was thrown down at Jesus' feet, the pompous crowd of men, probably with their arms crossed over their puffed up chests, demanded Jesus to answer, "What do you say?"
Jesus did not choose sides. He did not point His finger at the woman and condemn her. He did not glare at the crowd of men and lash back in self-righteous anger.
Instead, He bent down without saying a word and began to write something in the sand.
The Bible doesn't tell us what He wrote, but one could imagine that He began to write out the sins that each of these men had hidden in his heart. You know, the things we all try to cover over and decorate so that no-one else knows that we are really no better than the adulterer.
Finally, after a time, He stood up. His look towards them probably a look of deep hurt and pity.
"Let him who is without sin among you be the first to throw a stone at her."
The words hung in the air like an exploded atom bomb, for each of them knew that they, too, had things in their heart that deserved the punishment of death.
One by one, they each dropped their stones and walked away, leaving the woman alone with Jesus.
"Woman, where are they? Has no one condemned you?"
"No one, Lord." She meekly replied; probably struggling to look Him square in the eye.
"Neither do I condemn you; go, and from now on sin no more."
***************
With all the finger pointing and stone throwing, may we remember that we, too, have a multitude of sins in our closet that are deserving nothing less than death...
But by the grace of JESUS!