A Summer Book Review for "God: Accused or Excused?" 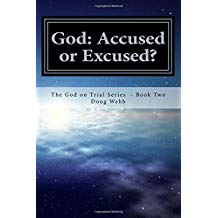 It has been awhile since my last post--partly because my husband and I celebrated our thirtieth wedding anniversary in Hawaii for 12 days; partly because I am in the middle of a huge writing project; partly because I work full-time, run a non-profit, and have three beautiful grand babies I want to spend time with; and for the most part, because I am just lazy.

Anyway, today I want to share with you a book review.

This summer I have been in the middle (amongst all those other things) of several books, but God: Accused or Excused? is one that I agreed to do a book review on, so here it goes.

So I began reading this book after signing up to do a review through Christian Women Affiliate.  At the time, I didn't realize it was a sequel, so I sort of felt as if I needed to read the first one in order to get my bearings on where the writer was coming from.  Yet, I like to think that I am somewhat "up" on this God stuff, so dove right in.

The author, Doug Webb, treats this book as a detective might while searching/researching more about  God and the validity of His Word.

I found it interesting that the author began his probing in the book of Genesis.  Not because that's an unusual place to start.  No, actually, it's a great place!  However, if he starts in Genesis in this book, where did he start in the first book?  Just wondering.

Anyway it was great because I was already reading through Genesis in my own personal study.

As I read through the first several chapters, I enjoyed the way he broke down the scripture; how he gave bullet points to help the reader stay on track; the usage of Hebrew words to help describe what was going on; and the plethora of scripture he pulled in from other books of the Bible as well.

I was intrigued as I read that fear entered our world for the first time when Adam and Eve sinned.  Not that this was earth-shattering knowledge for me, but that I guess I had never really thought of that aspect before.  And fear often plays a huge part in my life for one reason or another, so this stood out and caused me to look a little more into that topic.

Throughout the book, if I am honest, I did have some questions.  Matter-of-fact, I wrote in the margins!  Don't tell my mother.

An example of this would be on page 33 towards the bottom of the page.  He wrote, "It never occurred to God that anyone would ever mistrust His intentions."

What?  How do we know this?  Is there really anything in this world that "doesn't occur" to God and are we privy to all of God's thoughts?

On the same page, he also asks a question, "Why would God put a tree nearby, which if eaten from, could cause death?"  Yet, unless I missed it, I never really received an answer to that question.

Out of my own study, I believe God's Word shows us that God put the tree in the garden to give man (general term) free will/choice.  Adam and Eve had opportunity to choose to be obedient and not eat of the fruit of that tree.  Yet, as we know from history, they disobeyed God and sin entered the world.
Would it have been better if God had never put the tree there in the first place?  I'm not sure.  Sin had already taken place in the heavenlies.  Satan had already rebelled against God and had taken 1/3 of the angels with him.  He was on a warpath to destroy what God had already made.  Who knows but that perhaps there would have been some other way or moment that sin would have entered the hearts and minds of God's children.  Yet the point is, God already had a plan in motion.  Jesus--God's perfect Son, would come to earth and die for our sins.  He would take our punishment, and that is the greatest gift God could ever give us--the greatest cure to our disobedient hearts.

Moving on.  On page 73, second paragraph, the author writes, "I'm beginning to wonder if he (speaking of God) set some boundaries for himself, once he gave the earth to the children of men.  Maybe God couldn't intervene without permission."

I wasn't sure about this thought process either.  I truly believe it was the author's plan to explain, and perhaps he did somewhere that again I simply missed, yet that phrase bothered me.

It is true that Satan is the god of this world.  He has been given that authority by God for a time.  However, that does not limit God's power, nor cause God to have to ask permission to act in any situation or life.  I was a bit confused here and would have liked to seen a more thorough search and solution.

Overall, the book was an interesting approach to the beginning of the God story.  There are other writers who have taken a detective's approach, and being a cop's wife I appreciate that perspective.

If you are interested in reading this book or the others in his series, I would encourage you to go to the author's website at www.myfatherscrown.com or check out www.facebook.com/GreatDetectivesBibleTopics.  It is also available on Amazon.

Thanks for tuning in.  Now be watching for some pictures from Hawaii!  It was a trip of a lifetime!